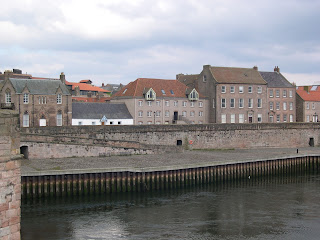 A Happy New Year to all my readers on January 2nd, when it may or may not still be a holiday here in Berwick upon Tweed. England only takes January 1st as a public holiday, Scotland takes 2nd as well. (No jokes please about Scottish hangovers requiring a longer recovery period.) So naturally here in Berwick confusion reigns. Since the local council has to follow the letter of the (English) law, that means that our bins were emptied this morning. Since the opening hours of large stores are dictated by head offices in London, that means they're all open today. But since many of the independent shops are run by people with loyalties north of the border, some of them stay firmly closed today. In some cases one feels that these shop owners would rather lose money than be seen to be ignoring a Scottish holiday.

A word about the terminology of this time of year. Most people know the word Hogmanay, an old Scottish folk celebration to mark the change of year. This has now been so successfully commercialised in Edinburgh that the Scottish capital is avoided until the second week of January by anyone concerned to prevent their credit card from melting. It is not so well known that here in North Northumberland and the Scottish Borders the traditional expression is Old Year's Night. My grandparents never said New Year's Eve, always Old Year's Night. This is still heard - only today somebody I was talking to referred to the weather on Old Year's Day, meaning the earlier part of December 31st. But as with so many other things the traditions of this area are being squeezed between the better known usages of Scotland and the South of England.

My parents maintained the custom of setting out drinks and snacks in readiness for anyone who chose to call round on Old Year's Night, the tradition being that everybody visited the houses of everybody else then. The welcoming table lingered on into the 1980s, but by then the contents were consumed only by the occupants of the house and any guests who had been formally invited. They took the custom of first-footing very seriously, so much so that my mother once forced me to stand in the snow in our neighbours' garden while we waited for my father to catch us up rather than risk either of us entering the house ahead of him, because having a woman as your first-foot is extremely bad luck and she was not prepared to be responsible for visiting a year's bad luck on the household. The worst possible luck is to be your own first-foot. I never got a straight answer on whether even having a woman as your first visitor of the year is better than being the first to enter your own house after midnight.

Every year of my childhood my family's first-foot was an old friend of my parents whose hair, I was assured, used to be raven black, which qualified him as the ideal dark male, even though his hair was nearly white by the time I can recall him. I've been told that one of my old neighbours in Alnwick now has a mixed race grandson who fulfils all the criteria of a perfect first-foot. His Caribbean mother probably has to wait outside in the snow.