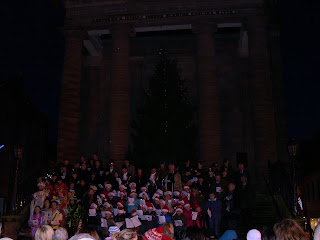 This is the scene on the steps of the Guildhall in Berwick at the official switching on of the Christmas lights a couple of weeks ago. The schoolchildren are in the centre, the cast of the pantomime staged every year by Spittal Variety Group are on the left of the picture, in costume and in character, the army cadets are at the back and the local clergy are presiding over everything. This seems to me a pretty good visual summary of how small town society works.

Despite booklets of carol lyrics being handed out at the start of proceedings, something went wrong and we ended up singing the first verse of Once in Royal David's City several times over and making no further progress with it. That's pretty typical of this time of year as well. Everybody has warm fuzzy memories of carol singing in their youth but nobody has ever quite mastered the words. It was a perishing cold day and most of us just wanted them to get a move on and switch on the lights so we could go home. But after the carols there was a little speech by the retiring vicar of the parish church, Canon Hughes, saying how happy he'd been working in 'this wonderful community'. When the lights on the tree did finally come on they were a little disappointing. The ones on the tree in Tweedmouth are better. This one in the picture below. 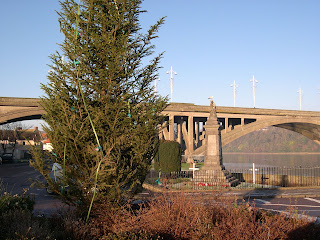 The lights switch-on was preceded by the official switch-on of the new Jubilee lamp. It looks to me much like any other street lamp, but it has a plaque on to explain that it is not merely a street lamp but was erected to commemorate the Queen's Diamond Jubilee. For this the Duchess of Northumberland made a rare trip to the far north of the county of which she is now Lord Lieutenant (no, I don't know what that means either). She looked Christmassy in a smart cherry-red suit and posed cheerfully for the local press photographer. Unfortunately I didn't have a chance to get a photo of her before she was whisked away to another engagement. Many in the crowd were disappointed that she didn't switch on the tree lights as well, but if she had she might have upstaged the vicar's farewell speech, which would never do. Ah, the niceties of precedence between the landed aristocracy and the clergy of the established church.

Many visitors come to Berwick for their Christmas holidays, so for the next couple of weeks we'll have to put up with large groups of people talking loudly in southern accents as they walk the Walls about  how charming this place is, but of course everyone here is unemployed. But at least they tend to mislay a lot of garments on their walks, which us unemployed locals can pick up and sell to Cash4Clothes.

Until January then, a Merry Christmas and a Happy New Year to all my readers. And our resident seal, now once again enjoying the celebrity lifestyle on its adopted sandbank by the bridge, sends greetings as well. 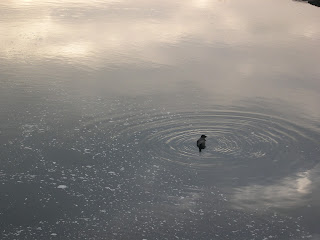