In Pursuit of the Seals, Again 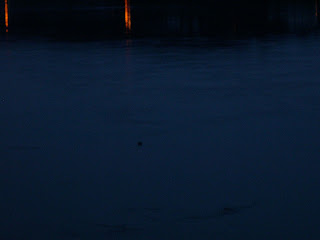 Over the past couple of weeks I've been chasing up and down the quayside like an idiot, sliding on the wet ground and trying not to fall into the water, in an attempt to get some decent close-up shots of seals. So far I've been unsuccessful. At this time of year there are seals to be seen in the estuary almost every day, but it's very hard to get photos of them because they only keep their heads above water for a few seconds at a time. They can hold their breath underwater for about ten minutes, and can swim a long way in that time, so the next time your target surfaces it could be out at sea. I bring you this pathetic attempt on the left as proof that I was out there trying until it was nearly dark. At least the water is quite a pretty colour in the twilight. If you enlarge the picture to full size you can tell that black blob in the middle is a seal's head. Maybe. 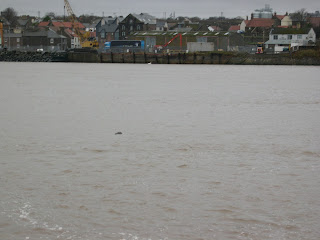 In this one on the right the black blob is slightly larger and at full size it is quite clearly a seal's head. Honestly. Tweed Dock is in the background. If you want to see some decent pictures of seals, just click on the link to the Farne Rangers blog, over on the right of this template. They have all the gorgeous close-ups you could want. The autumn is the breeding season for the grey seals on the Farnes, and for the last couple of months the rangers have been very busy counting the pups. They say they average about 1,500 a year, though the mortality rate among pups is high. It's during the breeding season that seals are a common sight in the estuary of the Tweed, as they determinedly chase the fish they need to regain their strength up the river. 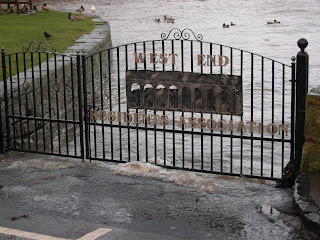 Yet again the weather has been terrible recently, with heavy rain and endlessly dark days. Many towns beside rivers have been flooded, but we don't seem to be in any danger of that here, even though we're right on the estuary. The walls of the quayside are high and strong and even at the highest tide after the heaviest rain the water is never even close to coming over them. But the waves do slosh through the gate of the slipway to the foreshore, as seen on the left. There's a row of parking spaces just outside this gate and experienced local drivers know to avoid the one directly in line with the slipway, where at high tide your car tyres are steadily bombarded with gravel by every big wave. Not to mention all the litter that gets washed up - don't get me started on that again. The weather has now turned bright and sunny but very cold. So now the challenge is to keep my gloves off long enough to photograph a seal.