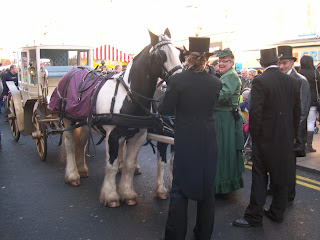 This is the carriage in which Father Christmas arrived  in Berwick today. It's a genuine 19th century horse-drawn carriage restored by a company in the Borders. Santa descended from it at the bottom of the steps of the Guildhall and then took his seat in the hall, where 'Victorian teas' were being served at the other end of the room. I'm not quite clear what makes a tea Victorian, other than the outfits that the waitresses were wearing. The photo below shows one of the rather splendid light fittings in the Guildhall as well as the Christmas tree that's in there just now. 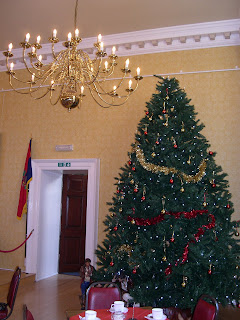 Many towns hold some sort of Christmas market, but for some reason Berwick has decided to go with a Dickensian theme every year. The justification for this appears to be that the great man himself gave readings in the town twice. Given the celebrated energy and frequency with which Dickens toured the country to give readings from his books, I don't feel this confers any particular distinction on Berwick. I'm also rather twitchy about any event where the general public are encouraged to appear in fancy dress, since it seems just to further the belief that Britain in general and the Borders in particular have no future other than as a theme park for the amusement of overseas visitors. I spotted a Japanese woman insisting that her husband take a photo of her standing beside the carriage, which confirmed this suspicion. (She got a shock when the horses moved off.) It's not like there's anything special about the stalls at the Dickensian market - they're a mixture of the same old stuff that's on sale at the ordinary weekly market and the same old stuff that's on sale at every farmers' market. And frankly the standard of the coffee that's available at most of these sort of events makes one look more indulgently at Starbucks' creative accountancy. Fortunately most of the locals seem to enjoy it all a lot more than I do, so I keep quiet. 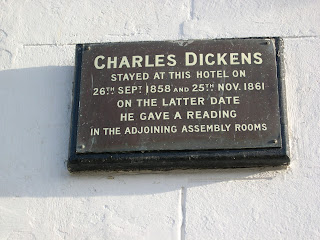 My first Dickensian market was during the unusually severe winter weather of two years ago. There was a great deal of grumbling afterwards about how much the takings were down because of the weather and how the snow had really spoiled everything. Nobody but me seemed to see any irony in objecting to the appearance of Dickensian weather. Apparently urchins cavorting joyfully in the snow is fine on Christmas cards, but in real life their parents say that children can't possibly go outside when it's so cold. The memory I treasure from that year is the sight of one of the organising committee who was dressed as the beadle from Oliver Twist in earnest conversation with an actual modern policeman about some law and order issue that had arisen. At the end of the conversation the beadle whipped his mobile phone out of the pocket of his caped and ribboned Victorian jacket and started issuing instructions. I would love to have a snapshot of this moment, but was afraid that there might be some sort of law against taking photos of a real policeman.

If any of my readers are interested in visiting the hotel that boasts the above plaque, it's the Kings Arms on Hide Hill. But at the moment it's closed for major renovation work, after which they hope to be able to provide decent showers as well as a Dickensian ambience.
Posted by Elaine Housby