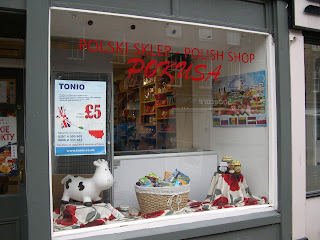 This is the Polish shop in Berwick, which has been open for a while now and always seems to be busy. I've been in there myself a couple of times; it sells very good sausages and also jars of pickled beetroot, which is a secret weakness of mine. I was the only customer who couldn't understand Polish but the staff were happy to speak English to me and translate some labels. The bottom photo shows the new Eastern European food section in the local Asda. It seems that the small Polski Sklep is doing good enough business to make the mighty Asda feel it needs to get in on the act. 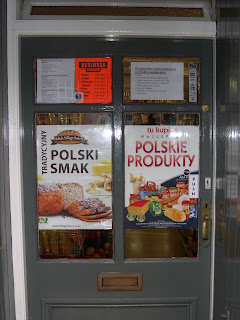 The arrival of large numbers of Eastern European migrants over the last decade has been one of the most dramatic changes to British society that I've seen in my lifetime. While this phenomenon is now taken for granted in cities, friends in London are often surprised to learn that the community here in the Borders is large enough to support specialist shops. In fact, according to official figures as quoted by the local BBC news, the North East region of England has the second largest number of Eastern European settlers after London. And if you counted the ones who choose to live just on the other side of the border it would be an even more striking statistic. The ability of Eastern Europeans to find work in places where the conventional wisdom is that there are no jobs is truly remarkable, and raises questions about the mismatch between the skills of indigenous job-seekers and those which are in demand locally. I don't want to get into that controversial area here though. For the purposes of this blog the interesting point is how migration within the E.U. relates to the campaign for Scottish independence. 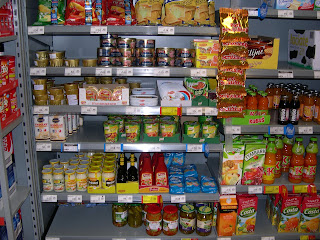 The policy of the Scottish National Party is to increase the population of Scotland by encouraging immigration. It can't do this at present because immigration policy is a power reserved to the Westminster parliament, which would like to reduce immigration to England. The present population of Scotland is around 5 million, which is comparable to some other countries whose independence nobody would question (Norway is the favourite example) but dwarfed by the 52 million or so in England. Also there's an awful lot of empty space in Scotland.The SNP assures us that the New Scots will be people of all backgrounds and ethnicities - although they'd still really rather not have too many immigrants from England, thanks.

Modern Scottish nationalism has always been based on the assumption of membership of the E.U. 'An independent Scotland within a federal Europe' was a slogan back in the 1970s. Current crises in the E.U. are making all those plans rather uncertain, and now the Westminster government is emphasising that Scotland could not remain in the E.U. after independence without formally applying for re-admission in its own name. In reality the legal situation is very unclear and, as I have said in earlier posts, having Berwick become a frontier town on the edge of the E.U. would be just so staggeringly impractical that it won't be allowed to happen. So we can safely assume that Poles and other E.U. citizens will retain their unrestricted right to enter Scotland and that Polski Skleps will continue to flourish north of the border as well.
Posted by Elaine Housby