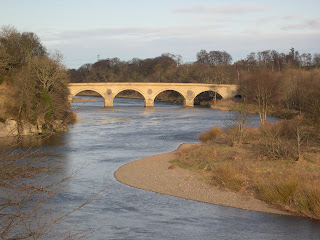 I'm recycling a photo this week. I used this picture of the bridge at Coldstream in one of the earliest posts I did on this blog, back in March. I reckon that most new readers won't scroll that far back, so here is another chance to see it. The river Tweed here forms the border between England and Scotland and if Scotland lost its membership of the European Union after independence it would become the border of the EU, with potentially dramatic consequences for local residents. This post is all updates on previous topics, because of a couple of items in the local paper which caught my eye this week.

Back in May I reported on the fascinating research being undertaken at the University of York on the accents of Berwickers and their opposite numbers across the border in Eyemouth. They're covering two towns on either side of the border at the western end as well, Carlisle and Gretna Green. The project is called Accent and Identity on the Scottish-English Border or AISEB. An exhibition is now being staged at the university of the work of the Department of Language and Linguistic Science which features the AISEB project. Principal investigator Dominic Watt was quoted in the Berwick Advertiser as saying that the vernaculars of our area have been relatively neglected by researchers, even though 'it has been claimed that the greatest concentration of distinctive linguistic features in the entire English speaking world is to be found along the Scottish-English border'. I am reasonably well travelled in the English speaking world and I think that claim is probably true. So hoorah for AISEB.

In April I wrote a piece about the problems of having a cross border postcode. Here in postcode TD nobody can tell which side of the border we're on. At one stage Channel 4 was showing me endless adverts urging me to be sure to complete the Scottish census as it was so important for the future of Scotland and for Scottish people like me. My April post was prompted by receiving an election flyer for a political party that wasn't actually fielding any candidates in England. Now we are about to have elections in England for the newly created post of police commissioner, and the old postcode problem has reared its head again. Some of the more politically engaged citizens of Berwick went online to learn about their local candidates, only to be told that they were not entitled to vote in this election as they lived in Scotland. Irate letters to the press ensued, denouncing this sinister attempt to disenfranchise the residents of the far north of the Northumbria police area. The website in question was the official Home Office site. That's right, the Home Office, that's the government department that's supposed to know about everything that's going on in the internal affairs of the UK. We are told that the mistake was caused merely by an unfortunate software glitch which has now been corrected. In reality we understand perfectly that it happened because the software was programmed to think that all TD postcodes were in Scotland. For heaven's sake, if it causes this much trouble, just change our postcode to NE and have done with it! Then we'll only get endless adverts for shops in Newcastle.