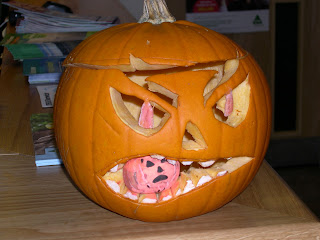 It was of course Halloween this week, so here is the splendid lantern produced by the hard-working and ever-cheerful young staff of Berwick youth hostel and perched on the corner of their reception desk. I'm a regular in the cafe there, where you get a great cup of coffee for about 50p less than in any of the fancy coffee shops. Berwick youth hostel is located in a converted granary famous for its lean, clearly visible in the photo below. Until a few years ago it was so derelict that it was in danger of toppling over altogether, but it has now been beautifully restored. If you fancy staying there look it up here. 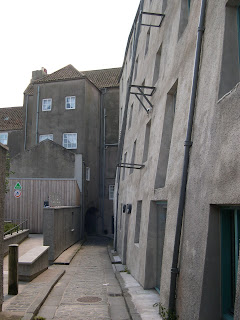 I want to take this opportunity - since to be honest it's the only one I'll get - to say something about the whole controversy over: Is Halloween purely an American import? It seems to be fashionable now to say that Halloween is just a piece of commercial nonsense that nobody in the British Isles had heard of until Hollywood brought it our attention. The answer to this is not straightforward. Pumpkin lanterns definitely were unknown in this country until we saw them in the scream-queen movies, and supermarkets here only sell them at this time of year. If you want to buy a pumpkin to eat in any week except the end of October you will struggle to find one. In fact I'm not sure that all the children making lanterns out of them have realised that pumpkins are edible. But the basic principle of making Halloween lanterns is indigenous - when I was a child we made them out of turnips. This custom appears to have been unknown in the south of England, and my southern friends at university gawped in disbelief when I told them about it, but it was an old tradition in the north of England and Scotland and also, I believe, in Ireland. So when pumpkins arrived the south took up lantern making from scratch and the north switched from turnips to pumpkins, a change embraced with some thankfulness because turnips are very hard work to carve.

The term Trick or Treat is also an American import but the general concept was already current. In my childhood, which was a regrettable number of decades ago, we used to get dressed up as witches or ghosts and go round our neighbours to show ourselves off, and they would usually give us small amounts of money - possibly sweets as well but I mostly remember money. This custom tended to blur into Penny for the Guy, which is the tradition of taking a 'guy', a stuffed model human figure in a pram or wheelbarrow, around from door to door on 5th November in memory of the Guy Fawkes plot and being given money to spend on buying fireworks.  Penny for the Guy lingered on into the 1980s but has now almost completely died out as Trick or Treat has become universal. And also children aren't allowed to buy fireworks any more, which is probably for the best.

There is a very famous book by the folklorist couple Iona and Peter Opie called The Lore and Language of Schoolchildren, documenting childhood customs in Britain in the 1950s. They reported that October 31st was a major festival for children in some parts of the country, as big as Christmas. It was associated with licensed disorder and in some places was in fact known as Mischief Night. Children felt entitled to play all kinds of tricks on their adult neighbours with complete impunity for this one night. A favourite was removing garden gates and hiding them in outbuildings or throwing them in a handy pond. I feel that if this custom were revived we would hear a lot in the media about the failure of modern parenting. The present Americanised practice of Trick or Treating is a form of Mischief Night, exported to the United States by emigrants from the British Isles, sanitised over time, then re-exported back to us by Hollywood.
Posted by Elaine Housby