FAQs about Berwick upon Tweed 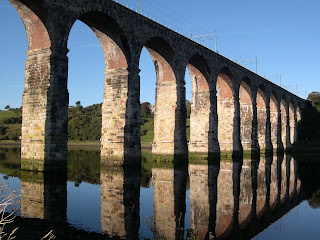 This is a photo of the railway bridge in Berwick on a nice sunny day, by way of contrast from my last post.

I've realised that some people who have only started to look at my blog recently may be unclear about where Berwick upon Tweed is and what's so special about it. So I thought that I'd provide a handy summary in the form of questions often asked by visitors.

Is Berwick in Scotland or England? I'm confused ...

Leaving aside the question of whether it ought to be or not, Berwick is, at the present time, as a matter of legal fact, in England.

So is the county of Berwickshire in England as well then?

No. Originally Berwick was the county town of Berwickshire, but the town was taken over by England while the county was left in Scotland. This is why the local press has to produce two separate newspapers, the Berwick Advertiser and the Berwickshire News, and struggle to find enough news to fill both of them.

How many times has Berwick been handed back and forth between England and Scotland?

According to all the books, fourteen. Most of these handovers were due to military conquest, they took place over a relatively short historical period and they were sometimes only a few months apart. The last time Berwick changed hands was in 1482 and it has been in England ever since. More precisely, it hasn't been owned by the Scots since then. For a long time the English regarded it as an occupied part of Scotland rather than as a proper part of England, similar to the English outpost at Calais. Until 1746 it was mentioned  in Acts of Parliament as a separate legal entity. At some point the authorities stopped doing this and started treating Berwick as a true part of England and of the county of Northumberland, but none of the books seem very sure when. Hence the 'grey area' in the title of my blog. And hence the belief of many Scots that it is still occupied territory.

Is it true that Berwick is still at war with Russia?

Probably not. Because of the persistence of the habit of listing Berwick separately in official documents, there is a hoary old story that the declaration of the Crimean War listed Berwick as a belligerent power but the peace treaty did not, and so Berwick is still technically at war with Russia. But the highly knowledgeable local historian Francis Cowe says that this story is not true.

And the Tweed is the river Berwick is built on, yes? That's the river in the photo?

That's right. Berwick is built on the north bank of the estuary of the river Tweed, which was at one time the border between England and Scotland. It's likely that it was called Berwick upon Tweed to distinguish it from the town of North Berwick which is up the road a bit (in Scotland). The village on the south bank of the Tweed is called Tweedmouth and it has never been in Scotland. In fact it's only been in Northumberland since 1835, it used to be part of the possessions of Durham Cathedral. It is now part of the Borough of Berwick, but both Berwickers and Tweedmouthers still talk about 'crossing the bridge' as if it were a big deal involving foreign travel.

What does the name Berwick mean?

All of the standard reference books about place names explain the name Berwick as meaning a barley farm. 'Bere' means barley and 'wick' is a common place name element meaning a farm. One book I've consulted says that 'wick' means specifically a small farm outlying from a larger estate. Francis Cowe says that the whole word 'berewic' means this. The town crest shows a bear and a wych elm tree - 'bear' and 'wych', get it? That's just a joke (actually it's called a rebus) but it confuses a lot of people.

Notwithstanding the consensus of all the books, a keen Scottish amateur historian once pinned me down for a good twenty minutes to explain his conviction that 'wick' comes from the Viking word for a bay. I suggested that if that's true then it's hard to explain why there are so many towns with 'wick' in their names that aren't on the coast. His answer was that it might mean 'farm' in England but in Scotland it comes from a different language and it means 'bay'. Not sure where this leaves Hawick, thirty miles inland and definitely on the Scottish side of the border. I think this is taking linguistic separatism too far.