The Smugglers of Eyemouth 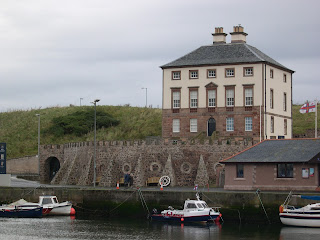 This is Gunsgreen House in Eyemouth. I've mentioned Eyemouth before in connection with the study which compared the accent of its residents with that of Berwickers, so I thought it was time to provide some visuals. It's the closest Scottish town to Berwick, about fifteen minutes drive straight up the coast. Walking between the two along the coastal path is popular with the sort of keen hikers who visit this area in large numbers, but count me out, thanks, I'll stick to the bus. Two routes run by Perrymans, who won an industry award last year for being the best small bus operator in the country, shuttle back and forth across the border all day, every day. Many people travel in both directions between Berwick and Eyemouth to work or shop. 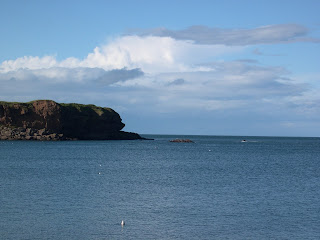 Gunsgreen House has been developed as a popular visitor attraction by emphasising its historical connection with smuggling. The Nisbet family, whose fortune was built on smuggling, apparently built it with this in mind, creating large cellars which could be reached quickly and easily from a boat moored at the harbour wall, and even secret hidey-holes in the walls. Eyemouth was a notorious centre for smuggling in the 18th century, during the period when the duties charged on luxury goods such as brandy, tobacco and tea still differed between Scotland and England, even after the Acts of Union. The local customs officers mostly ended up as ineffectual alcoholics after being bribed to keep quiet with free supplies of the goods, while those in Berwick had no jurisdiction over the border.

Of course the smuggling of cigarettes is once again a thriving trade, not necessarily in Eyemouth (my lawyers have advised me to add) but in many places down the east coast, because of the amount of tax piled on to the legitimate kind by successive governments who claim that they are only doing it to discourage smoking but would actually find the budget deficit even worse than it is if the whole population really did quit.  Economists of the laissez-faire persuasion would say this just proves that you can't buck the market, not in the 18th century and not now. 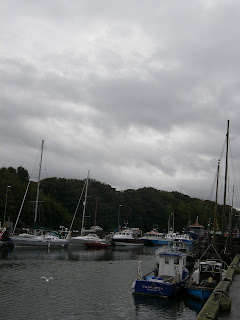 It is fascinating to speculate on whether we would see a resurgence of smuggling in the event that Scotland acquired the power to set taxes independently of the Westminster government, under either full independence or the so-called 'devolution max' option. A few weeks ago I wrote about the controversy surrounding the decision by the Scottish parliament to introduce minimum pricing for alcoholic drinks and the resulting incentive for Scots to travel south of the border to buy their booze. At the present time there are no restrictions on how much drink you can transport from England to Scotland other than the breaking strain of your car axle. In the event of Scotland's being able to set its own taxes across the board, for example to vary or even abolish Value Added Tax, we could well see incentives to transport a range of goods in large quantities across the border. I am not making any assumptions yet about which direction they would be travelling in, but eventually the government of whichever country was losing out would probably decide that enough was enough and impose legal limits on the quantities of goods from the other country which could be transported or sold. In that case we could well see the resurgence of Eyemouth and/or Berwick as centres of significant smuggling operations. Particularly since times are hard in the fishing industry and boat operators need to diversify. Once again parents could be bidding their children, Watch the wall, my darling, when the gentlemen go by!
Posted by Elaine Housby