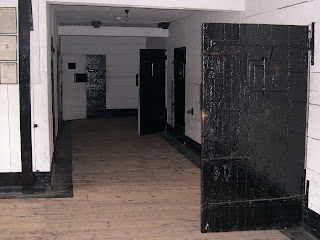 These are the 18th century prison cells on the top floor of Berwick Town Hall - that's the building with the bell tower that looks like it ought to be a church. Obviously the cells are not used any more for their original purpose. They could be a major visitor attraction if only there was anyone in Berwick who could manage to co-ordinate a decent tourism promotion campaign, but there isn't, so they aren't. Intermittent tours of the cells take place but the dates can never be predicted with certainty. The only times you are guaranteed to be able to see them are two weekends in September: the national Open Doors weekend when  many historic buildings are opened to the public, and the Berwick Film and Media Arts Festival when they are used as a venue for video installations. Last week I wrote about how it is the use of unusual venues which makes this Festival so special. Seeing the films running inside the cells always makes a great impact on visitors, and the programmers try hard to choose appropriate ones. This year's included a Polish film documenting the long distance romance of two imprisoned murderers. 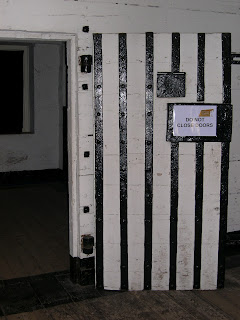 Observe this notice asking visitors not to close the doors. This is necessary because the doors of prison cells are of course designed to be impossible to open from the inside, so if your family go off and leave you there as a joke you will be stuck there until one of the stewards comes and rescues you, and frankly we have better things to do so we may decide to leave you there for a bit. The Festival organisers take health and safety very seriously, as all events have to these days, and armfuls of laminated notices must be patiently blu-tacked to walls and doors by the volunteer stewards. Mostly these concern things like 'uneven floor' and 'low level lighting' where you can expect visitors to co-operate out of a natural desire not to fall over in the dark. The only warning that is persistently ignored is this one, asking visitors to please not close the doors and shut themselves in a cell. Honestly, it's not big, it's not clever and nobody else thinks it's funny.  Children are of course the worst offenders but plenty of adults who should know better do it too. They all just love the idea of being locked in a cell. Apparently the popularity of this kind of experience of the brutalities of the past is recognised in the visitor attraction business and referred to as 'dark tourism'. Presumably these people wouldn't be so keen if they'd ever spent time in prison for real.
Posted by Elaine Housby