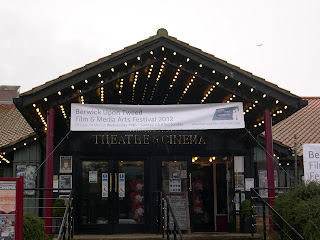 Berwick Film and Media Arts Festival started yesterday. It's on until Sunday 23rd so if you live within travelling distance you still have time to come and see it. Look at www.berwickfilm-artsfest.com for details. We don't claim to rival Sundance or Cannes but we do aspire to be the best small film festival in the world. It's been running for several years now in precarious financial circumstances and has now finally attracted secure funding. As a result, after a couple of years of telling volunteers to preserve their festival tee-shirts carefully for next time, because they don't grow on trees, you know, this year we all have brand new tee-shirts in a different colour! And I'm proud to wear it. 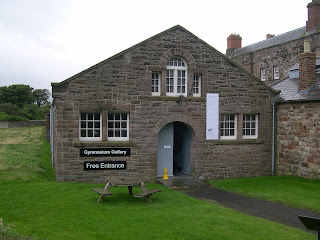 The Festival is centred on the Maltings theatre and cinema building, shown above. This is a purpose built arts complex which attracts bitter envy from other towns in Northumberland, who suspect that the Arts Council of England funds it particularly generously just to make a point to the Scots who form a large percentage of its audiences. Last night the Film Festival opened there with Chasing Ice, a documentary about American photographer James Balog and the Extreme Ice Survey, a remarkable project which recorded glaciers over several years and generated time lapse film whch starkly ilustrates the speed at which the Arctic ice is receding. It made a great impression on everyone who saw it and it was perfect for the theme of this year's festival, which is the relationship between still and moving images. Balog's still photography of the ice is extraordinarily beautiful, while the documentary maker Jeff Orlowski has captured the tension between aesthetic thrill and scientific fear. Orlowski recorded a special message for the Berwick audience. Thanks Jeff, we really appreciated it. Tonight as part of the Festival the Maltings is hosting the UK premiere of Resident Evil: Retribution, because it was directed by Paul Anderson who is the son of Chris Anderson who was one of the founders of the Berwick Film Festival. Resident Evil is not my sort of thing but it's great for Berwick to have the UK premiere of anything at all, and seeing a long line of eager young people in fancy dress as zombies was something to remember. 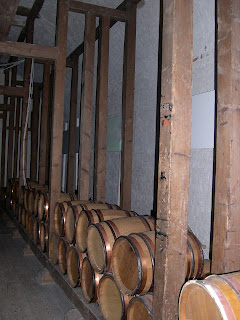 What makes the Berwick Film and Media Arts festival so special is that it does not just consist of feature films shown in a cinema, it includes a series of video installations set up in unusual locations all over town. You can follow the whole trail with the help of a leaflet but many people just stumble across an installation by accident and so have an artistic experience which they might never have deliberately sought out. The whole town is turned into one big celebration of the cinematic arts and this gives the festival an immersive quality which I have never come across anywhere else. The picture on the left is the venue I was stewarding this morning - it's the magazine or arsenal next to the old barracks, where the gunpowder was stored. These barrels are modern reproductions. One of the visitors asked me if they had gunpowder in. Since there was no mention of this in the otherwise exhaustive health and safety assessment, I thought not. Setting up cabling for three video projectors - the installation in there is a triptych - in a building hundreds of yards from an electricity supply is a real technical challenge. The photo above shows the Gymnasium Gallery, formerly the gym for soldiers in the barracks but now an art gallery. It is hosting an installation which combines 24 separate screens to give the effect of a 19th century zoetrope. The programme describes it as 'ambitious'. Unfortunately it's so ambitious that at the time of writing the technicians haven't been able to get it to work. Never mind, it'll probably be fixed before Sunday and meanwhile there's plenty of other wonderful things to see.