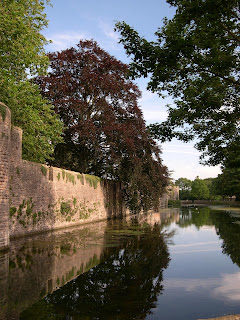 This is not a photo of any part of the Debatable Land. It was taken in the city of Wells. I've been visiting friends for a few days in The Land of Far, Far Away, otherwise known as the South of England. Yes, I do have friends Down South. I don't have anything against Southerners in any racist, xenophobic kind of way. I just can't help feeling that they're not like us. And the South is not like the North. I've been thinking about the differences that struck me, and this idyllic scene seemed like a good visual shorthand.

For a start, it seemed very quiet without the seagulls, but of course that's not a north-south difference. It always seems quiet when I go inland. I live with the screeching of gulls 24/7 and I only notice it when it stops.  Second, the weather was glorious. Very warm, blue skies, no wind. The media were calling it an Indian summer. On my first day back in Berwick it rained heavily all day and now it's blowing a gale. To be fair, I hear that the weather down south isn't so good now either. But it did remind me that nobody is ever going to visit the Borders for the climate. And then there seemed to be an awful lot of trees in Hampshire and Somerset. Acres of sun-dappled leaves rippled prettily on every side. Of course we have trees in Northumberland too. Honest we do. But we do also have a lot of bare moorland. For those of us who grew up here the distinctive beauty of this moorland is imprinted on our hearts. But it is not the landscape that is celebrated as England in the canon of English literature. It's the softer southern landscape of low hills and something called 'water meadows' which is evoked in, for example, Alice Through the Looking Glass, where the chessboard effect is created by the small streams criss-crossing the small fields. My friends live beside a water meadow. It seems to be what we call a pasture - a field beside a river that you stick cows in.

I went on the tour of Winchester Cathedral. It has 13th century floor tiles. This is truly amazing. I've never seen anything that old on a floor. The kind of society that existed in the 1200s in the Borders was not conducive to anything that was put on a floor surviving for very long. There were too many people tramping about to fight with each other and too many animals that needed stabling in any handy old building. In fact all of Winchester and Wells have the look of somewhere that's had a fairly untroubled existence most of the time. The most famous historical character in Winchester is King Alfred and his great achievement was paying off the Danes who conquered the rest of England. I don't think anybody in Hampshire ever had to take refuge on the upper floors of a pele tower after locking their livestock in on the ground floor, while the thieving gangs known as reivers roamed about looking for anything not nailed down to take away with them. And even though Winchester has seen its fair share of political turbulence as the monarchy and government of England took shape there, I don't think it ever had armies of thousands fighting on its territory. The book Historic Architecture of Northumberland explains that the distinctive character of the old buildings of the Borders comes from the fact that even domestic buildings had to function as defensive structures in a lawless and violent society. Function and fortification had to take precedence over prettiness for hundreds of years.

When my train from London drew into Newcastle my heart did a little leap of happiness. This happens every time I approach Newcastle from the south and see that view of the bridges. It also did a little leap when I boarded the train at Kings Cross and the woman in charge of the coffee trolley spoke to me in a Geordie accent. And I'd only been away five days.
Posted by Elaine Housby