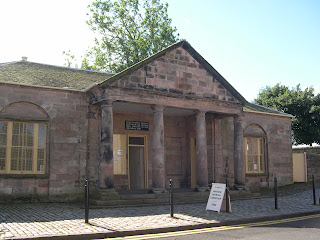 This is the 18th century guardhouse in Berwick known as the Main Guard. Originally it was located in the town centre and was, well, the main guard point. After the end of the Napoleonic wars the authorities stopped worrying about anyone invading and scaled down the garrison in Berwick. The locals complained a lot that having a guardhouse in the middle of the high street was obstructing the traffic. The authorities were looking around for job creation schemes for unemployed former soldiers, and shifting the guardhouse seemed to fit the bill. So it was dismantled and rebuilt just off the Walls, out of everybody's way. They made a good job of it and you would never think to look at it that it had ever been anywhere else. The building was restored and cleaned up a while back and is now rented from English Heritage, who own it, by Berwick Civic Society, who put on an exhibition about local history in there every summer. 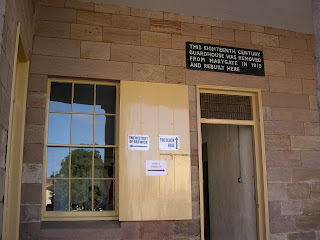 What visitors really like however is not the interesting historical information or the attractive exterior architecture, but a small, dank, windowless room inside the building known as the Black Hole. It has a flagged floor uneven enough to require a warning notice, bare whitewashed walls and the original heavy wooden door. It is usually full of the Civic Society's junk and looks like a particularly off-putting version of everybody's cupboard under the stairs. What was it for? visitors invariably ask. Well, it was the 18th century version of a drunk tank. People who were picked up for being drunk and disorderly were locked up in the Black Hole overnight with no fire, light, bedding or, one fears, sanitation, before being hauled before the magistrates in the morning. Every time I've told this 'horrible history' to a visitor they have promptly replied 'they could do with using it again these days!'.

The police in Berwick are still shovelling drunks off the streets and into cells every Friday and Saturday night and often other nights as well. The problem here seems at the moment to be no worse and no better than anywhere else. (I've always thought there are more unpleasant drunks in Alnwick, but that's a controversial view.) The situation could though be about to get completely out of hand. The Scottish government is introducing a legal minimum price for a unit of alcohol which would have the effect of raising prices on many of the most popular drinks, particularly those sold very cheaply by supermarkets. I'm all in favour of this. The problem is that it's not a UK wide policy yet. Holyrood is going ahead with the scheme while Westminster dithers. The result will be that alcoholic drinks in Scotland will suddenly become more expensive than in England. And what do you think that's going to mean for Berwick? Yes - car loads of Scots driving to our local supermarkets to stock up. If they take it home before they drink it that might not be so bad, but my guess is that we'll also see a lot of inebriated Scots staggering along the river paths to join the inebriated English who are already a permanent fixture there.

This issue turned into a party political row when the Labour group on Northumberland County Council called on the council to seize the opportunity to promote the north of the county as a 'booze cruise' destination for Scots. I grieve to see members of the Labour party lose touch so completely with their temperance roots. They were promptly condemned by the Liberal Democrats on the council and by our local MP Alan Beith, who is a LibDem and an active Methodist. I don't think they meant us to take the term 'cruise' literally, they were just using the analogy of those day trips across the Channel to stock up at the Calais hypermarket. My local newsagent though seemed to have taken it that way when we discussed the matter as he sold me my copy of the 'Tiser last week. The only place cruises would be able to sail from would be Leith, he said, and would it be worth the fare? Don't laugh- it all depends how many cans you buy after you dock.
Posted by Elaine Housby