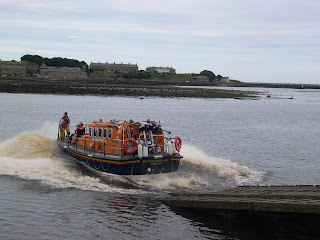 This is the Berwick lifeboat Joy and Charles Beeby being launched last Sunday. Not for an emergency thankfully, purely for exhibition purposes at the annual fundraising fete held on Carr Rock, Spittal, where the lifeboat station is situated. I love lifeboat fetes. All of the RNLI stations down my stretch of the coast, and presumably everywhere else as well, hold one over the summer. The dates are co-operatively chosen so that no two fetes within travelling distance of each other are held on the same day. Should you so desire you can support the lifeboat fetes at (from north to south) St Abbs, Eyemouth, Berwick, Seahouses, Amble and Cullercoats in any one summer. The most fun bit is watching the crews demonstrate their rescue techniques. One of them will cheerfully jump into the water, light a coloured flare and wait for the boat to zoom flashily around the harbour before homing in on him and hauling him aboard. A couple of years ago in Amble the display was based on a vessel bearing the somewhat non-p.c. name of Chav Boat whose occupants were enthusiastically demonstrating the dire consequences of heavy drinking and rowdiness on the water. So long as it's not needed anywhere for real the RAF search and rescue helicopter will also take part, winching a man up from one boat and depositing him gently on another one in a way that is really quite impressive. 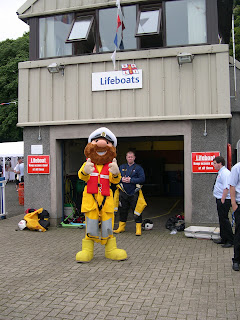 The modern Facebook-friendly mascot of the RNLI is Stormy Stan, seen here obligingly posing for me. He works along the same lines as Santa Claus, embracing small children while their parents take a picture and then with a bit of luck put a donation in the bucket. The crew member behind him is wearing the indoor uniform of the service. The Royal National Lifeboat Institution is a remarkable phenomenon - a vital emergency service operated entirely by volunteers. You wouldn't set it up that way if you were starting from scratch, but it's developed gradually over nearly 200 years into a service that works perfectly, and if it ain't broke don't fix it. The RNLI attracts enormous public affection and loyalty and never has any difficulty in raising enough money for its running costs. Having grown up on the coast I had always assumed that people inland did not know or care about it, so I was taken aback the first time I saw someone rattling a tin for the lifeboats in the centre of Birmingham, which is as far from the sea as you can get in the British Isles. I spoke to the tin-rattler and learned that she was a native Brummie who barely knew the coast, yet shared the general admiration for 'the charity which saves lives at sea'. 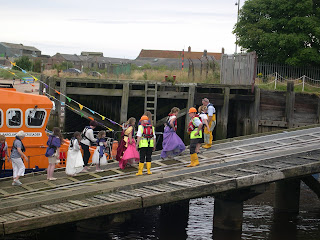 Remember the Tweedmouth Salmon Queen? This is her again. One of the more challenging duties of the role is the requirement to arrive at Carr Rock on a lifeboat and pick her way gingerly up the launching ramp, wearing a lifejacket over her gauzy gown. Her young attendants have to do likewise. The mayor is standing at the top of the ramp to welcome them. Eagle-eyed viewers may notice that this is a different lifeboat, called Barclaycard Crusader. It's based at Eyemouth, the next station up the coast, and accordingly was displaying a Bonnie Scotland banner. The name always makes me giggle,but I suppose that sponsoring lifeboats is one way for Barclaycard to fullfil the Corporate Social Responsibility Mission Statement which it no doubt has filed away somewhere. This ceremonial landing is solemnly announced over the loudspeaker as 'the arrival of the civic party', and the really clever part is that the tide has to be at just the right height to facilitate it. The organisers have to pore over tide tables before they fix the date as well as liaising with half a dozen other fete committees. So make it worthwhile for them by buying an RNLI torch or teatowel, and please, I beg you, don't be one of the idiots who force the volunteers to risk their own lives in a rescue attempt that would never have been necessary if the rescue-ees had shown some basic maritime common sense. There are too many of them nowadays. 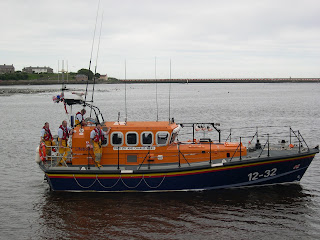