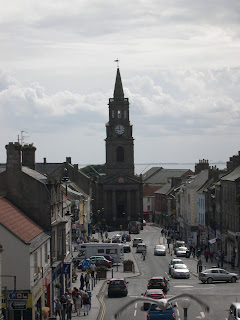 At precisely 8.12 am on Friday 27th July the bells in the tower of Berwick town hall, also known as the Guildhall, started ringing. We are used to hearing the ringers practice every Thursday evening but the sound of a joyful peal at such an ungodly hour awoke confused folk memories of V.E. Day in me as I stumbled between bedroom and bathroom. It was, of course, the national celebration of the start of the Olympic Games dreamed up by the artist Martin Creed. He also suggested that individuals should ring their door bells or make a noise on pots and pans, but thankfully nobody round my way took him up on this. Considered as a piece of art, this struck me as requiring not much more thought on his part than his famous lump of blu-tack stuck on a wall, but as an expression of national relief that after seven years of preparation the Olympics were now, for better or worse, amongst us, it was a pretty good idea.

Regular readers of my blog may recall that the parish church of Berwick has no bell tower because it was built under the puritan regime of Oliver Cromwell, and so bells were installed in the Guildhall when it was built in the next century. (For more on the church see the post of  10.5.12.) They may also recall that the seagulls in Berwick are a dratted nuisance, and so will not be surprised to see a gull flying towards the camera at the bottom of the picture. I do have seagull-free photos of the Guildhall, but I quite like this one. 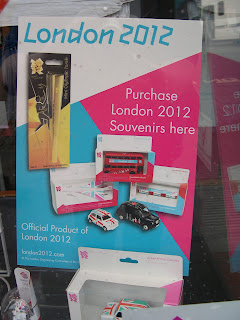 The nearest the Olympics have come to us is Newcastle, which is hosting some of the football matches. The train station and city centre are covered in signposts to the St James Park ground printed in a bright bubblegum pink which comes as a shock in a city where football fans bleed black-and-white. LOCOG have apparently decided that even if nothing else is memorable about these Games the colour scheme will be, so pinks and purples are everywhere. From the train I thought I saw the Olympic rings hanging on the Tyne Bridge, but when I went down to the quayside to get a photo I couldn't see them anywhere. I suspect I was standing too close to the base of the bridge, but in any case, given the ferocious brand protection exercised by the IOC they'd probably get this blog shut down if I posted a photo of their symbol.

This window display was snapped in a sports shop in Marygate, the main shopping street of Berwick. It is not entirely clear why any visitors to this country would want to buy their souvenirs of London 2012 in Berwick rather than in, say, London, which may be why all Olympic souvenirs now have 20% off. Except the replica torches, which have enjoyed an inexplicable popularity.

I used to be a hard-core Olympic refusenik but I was completely won over by the fantastic opening ceremony. The next day I held my head a little higher as a proud citizen of what Danny Boyle called the Isles of Wonder. Only a few killjoy Tories have dissented from the rapturous reception given to the ceremony. They thought it was 'leftie' - which was exactly why some of us liked it! Considered within the particular remit of this blog, there seemed to be nothing to upset any of the 'nations and regions' of the UK. Danny Boyle scrupulously segued from Jerusalem's celebration of England's green and pleasant land to traditional songs from Northern Ireland, Scotland and Wales (alphabetical order, in other words). The uniforms of Team GB look a lot more blue than red, so that should gladden the hearts of Scots. And one of the young athletes who lit the cauldron comes from Westruther in Berwickshire, very much part of the Debatable Land. Take a bow, Callum Airlie.

The Commonwealth Games of 2014 are being held in Glasgow, which Scottish nationalists calculate will generate a surge of national pride that will translate into votes for independence in the referendum to be held in the same year. There is nothing at all 'debatable' about Glasgow, indeed a city with a stronger identity or more clearly defined sense of its place in the world would be hard to find. But it is within day-tripping distance of Berwick, and after enjoying the Olympics so much more than I expected I am seriously thinking of attending some events at the Commonwealths. I'll be the one not waving a saltire.
Posted by Elaine Housby