'A Wake for the Salmon' 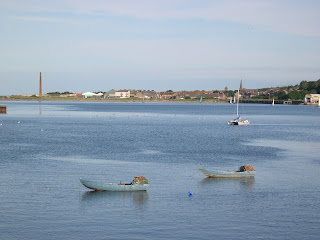 Following on from last week's Salmon Queen festival, the boats appeared this week on Gardo Stell, next to the Old Bridge on the Tweedmouth side of the river. This is now the only salmon fishing stell in regular annual use. The camouflage effect of the boats' blue paint is not ideal for a photographer. I assumed this traditional colour was designed to hide them from the fish, but I'm told it is chosen as the colour most visible at night. One boat remains on the sandbank where they are based, not visible in this picture but exposed at low tide, while the other end of the net is attached to the second boat and a man rows round in a circle to spread it out. After waiting a while for the fish to swim into it the net is winched back in. Part of the process can be seen in the photo on the right, taken last year in admittedly failing light. 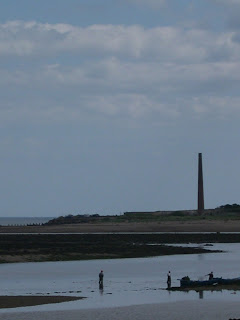 I was once walking across the bridge on my way back from the supermarket when I saw the men despatching a net full of fish on the sandbank by clubbing them. The contrast between my bag full of packaged, processed food and the emotionless killing of the salmon gave me a jolt. It had a primal quality which reminded me of Hemingway's novella, The Old Man and the Sea. It is easy to romanticise fishing, and I was probably guilty of this when I first came to Berwick, but it is a hard, tough trade which has to battle constantly against the vagaries of both nature and the commercial market. The Tweed is one of the great salmon rivers of the world, and the fish from here reportedly sell for astonishing prices in restaurants abroad, but not much of the profit reaches the men who catch them. Nor do the fishermen share my own love of the seals, since they are competitors for their livelihood.

Local photographer Jim Walker made a prolonged study of the salmon fishing industry. For this post I have borrowed the title of his best known book, A Wake for the Salmon. This is now out of print and the main collection of his work available is By Net and Coble. If you have any interest in the subject I advise you to look at this book. Jim's work has an elegiac quality because he was documenting an industry in steep decline, in the years immediately preceding the closure of the Berwick Salmon Fishing Company.

I'll end with an image from the float parade which concluded Tweedmouth Feast. Young Rebekah was chosen to wear the Salmon Queen's crown, according to the committee, because of her obvious pride in coming from Tweedmouth. So the place is far from finished yet. 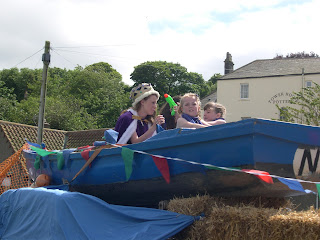 P.S. The Berwick Advertiser had the cheek to get the chair of the Feast committee to ask us in her opening speech to send it any good photos we took of the event. It seems that nobody did, because the photos in today's edition are rubbish. Dream on 'Tiser, I'm keeping my photos for my own publication.
Posted by Elaine Housby