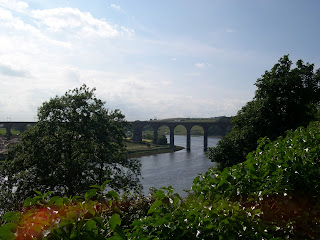 The story of the Anglo-Scottish twins has received extensive media coverage this week, and I've decided to join in. To read the full story, look at www.berwick-advertiser.co.uk. I can't show you any directly relevant photos without breaching copyright, so here are a couple of pretty pictures of bridges instead. One of them shows 'twin'  swans, geddit? Oh well, please yourselves.

The parents of these twins live in Wooler, a small town about fifteen miles south-west of Berwick. Their mother went into labour early on 1st July and gave birth to the first twin at home. An ambulance then took her to the nearest hospital, the Borders General, just outside the Scottish town of Melrose, where the other twin was born. Result: an English son and a Scottish daughter. Their father has joked about buying them English and Scottish football shirts respectively. 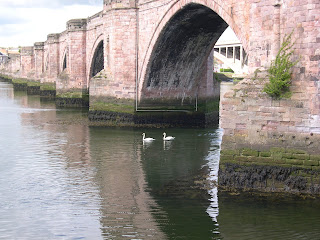 The only unusual thing about this story is that the unexpectedness of their arrival caused one of the babies to be born at home. Residents of the far north of England routinely receive treatment at Borders General hospital as well as Wansbeck hospital in mid-Northumberland. If you suffer a medical emergency and need to be rushed to hospital, the one you end up in will depend not only on the nature of your problem but on where exactly you live, where the ambulance has come from and which place you can be got to quickest in the prevailing road and weather conditions. During the heavy snow a couple of years ago one unfortunate woman in labour had to be air-lifted out of gridlocked traffic. And of course when a resident or visitor on Holy Island has a heart attack during the highest six hours of the tide, which seems to be a not infrequent occurrence, they can only be reached by air or boat. The air ambulance normally flies to a Newcastle hospital where there are helicopter landing facilities. On the other hand, if you collapse in Cornhill then a quick cross-border dash by road to Melrose will probably be the best option.

The future of health services in the event of Scottish independence becoming a reality is the greatest concern that residents of the English Borders have about the SNP referendum proposals. I hope that whatever happens we will never see a situation where any hospital would refuse to admit a woman in premature labour, no matter what her nationality might be. But it may very well be the case that an independent Scotland would not be prepared to pay for residents of England to receive routine health care in its hospitals. If that were so then people in Berwick, Wooler and the surrounding villages will face longer travelling times to hospital, a longer wait for emergency ambulances which are coming from further away and possibly even having to change their GP, because several GP practices have cross-border catchment areas. So far the SNP have said nothing beyond vague reassurances on this subject, and nobody believes that Alex Salmond has ever thought it through.

I once had a frustrating experience trying to get an SPCA inspector to come and rescue an injured bird in Berwick. The English branch based in Newcastle said that Berwick was too far to travel and the Scottish organisation said that they do not work over the border at all. Will we ever see the day when a phone call seeking help for an injured human produces the same response?
Posted by Elaine Housby