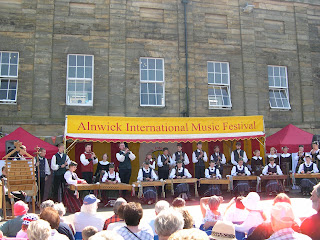 This week I bring you some pictures from a little further south than usual but still well within the territory historically disputed between England and Scotland, the town of Alnwick. This town is best known for its large and showy castle and the recent development of part of the castle grounds into a horticultural theme park known as the Alnwick Garden, but since that's had quite enough publicity already I don't propose to add to it here. Alnwick International Music Festival has been, as some of its banners proclaim, 'welcoming the world to Northumberland since 1976', without any help from the Castle, solely through the hard work and dedication of a small band of volunteers. A stage is set up in the marketplace and visiting groups perform traditional dances and songs from many countries all day, every day for a week, weather permitting. When weather does not permit, which is often, the whole operation moves into the hall seen here behind the stage. 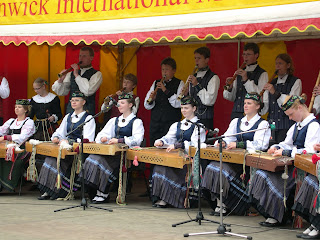 This is the Lithuanian group Zemaitukas. The Baltic states are now frequent visitors to the festival, possessing as they do the organisers' preferred combination of an unrestricted right of entry to the UK plus an attractive national costume and lively traditional music. Here they perform on a sort of horizontal harp, the name of which I'm afraid I didn't catch. I was interested to learn that they come from the town of Klaipeda, because that name often features in the reports of activity in Tweed Dock as the next destination of ships calling in there.

A friend of mine regularly volunteers as a 'group host', which means caring for the every need of a particular visiting group throughout the festival. Some of them are more trouble than others. This year she has had to make three trips to hospital with her accident prone charges. A few years back she had to smooth over a nasty spat arising from an unfortunate confusion of the Slovenian and Slovakian flags. (Since the organisers of the London Olympics managed to mix up the flags of North and South Korea, I think that the Alnwick volunteers can be forgiven for that.) 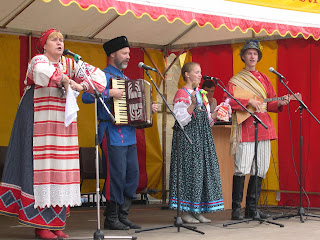 This is a Russian family group who perform under the name of The Family Tradition Ensemble. They have attended the festival several times; the daughter first trod the boards in Alnwick when only just able to toddle on stage. I nicknamed her the Infant Phenomenon, after one of the members of a family group in a Dickens novel.  As you can see she is an infant no longer, but still a phenomenal performer for her age. This is a good opportunity for me to send greetings to all my Russian readers, of whom Blogger Stats tells me I have a surprising number. I hope you like Family Tradition's crowd-pleasing version of the Russian bear. 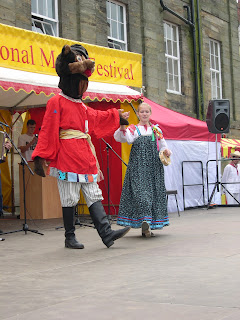 Apart from the obvious problem of trying to raise enough funds to feed and shelter a hundred or so international performers for a week every year, the main headache for the organisers is visa problems. Every year at least one of the groups listed in the programme is not actually in evidence, after failing to secure the necessary immigration documents. This year the no-show is from India. Perhaps surprisingly, a group of Mexicans have made it past the UK Borders Agency without incident. As restrictions on immigration to this country grow ever tighter, it is sadly becoming difficult to welcome the music and dance of some regions of the world to Northumberland.