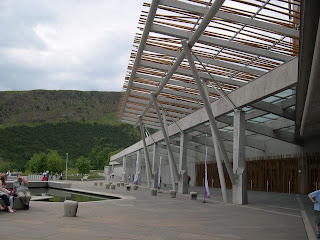 This week for the first time ever Debatable Land has travelled to the extreme limit of its range and brings you pictures of the Scottish Parliament. It's a beautiful building but then for what it cost (£414.4 million according to the official statement on the Parliament's website) it really ought to be. It is magnificently located with a splendid view of the hills which frame Edinburgh so dramatically. I went on the guided tour last year and can report that the view from the committee room we were shown is good enough to make many tedious discussions more bearable. 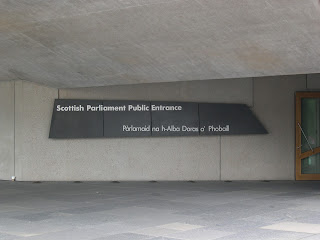 I felt that this week I should comment on the agreement signed on Monday by Alex Salmond, First Minister of Scotland, and David Cameron, Prime Minister of the United Kingdom, setting out the legal framework for the referendum on Scottish independence which will take place in about two years time. The agreement allows it to be held any time before the end of 2014. If it hasn't happened by then the agreement will expire under what they call a sunset clause. Both the Scottish and UK governments have agreed to respect the result.

The next day I made a point of buying a copy of The Scotsman so I could swot up on the details. The Scotsman is the leading serious newspaper of Scotland - yes, they are aware that the name is sexist by modern standards but it seemed okay in 1816 when it was founded and it's too late to change it now. If you've been following me this far you won't be surprised to hear that Scottish newspapers are on sale here in Berwick. The front cover had the headline 'an historic day' and a large photo of Mr Salmond and Mr Cameron shaking hands in a statesmanlike fashion, though it was noticeable that neither of them were smiling with their eyes.

The most significant outcome of the long negotiations between Holyrood and Westminster that led up to this agreement is that Mr Salmond has not got his way about the inclusion of a second question on the ballot paper offering the option of endorsing the so-called 'devolution max' position rather than outright independence. Under devo-max the powers possessed by the Scottish government would be extended so that it could set taxation independently of Westminster but it would remain part of the United Kingdom and could not pursue a separate foreign policy. Mr Cameron has succeeded in limiting the ballot to one Yes or No question on whether Scotland should become independent. All the polls suggest a majority in favour of devo-max but only a minority for full independence, so by removing this fallback option the stakes for which Mr Salmond and his nationalist party are playing have been considerably raised.

For the purposes of this blog I try to maintain a policy of neutrality on Scottish independence. I was once rather keen on calling the blog The Middle Shires, which was the name King James VI and I urged his newly united subjects to use instead of the Borders, but I rejected this because it would have implied that I have a Unionist agenda. My personal position is that I am broadly sympathetic to Scottish independence in principle but can see an awful lot of problems with it in practice and worry about the effect it would have on Northumberland, which is where my heart lies. My personal prediction about the outcome of the referendum is that it will fail to get a majority for independence and that the SNP will then start all over again to campaign for devo-max, which will be achieved eventually after a few more years of negotiations and another referendum. But truly, almost anything could happen in the next two years.
Posted by Elaine Housby