The Great Fishing Disaster of 1881 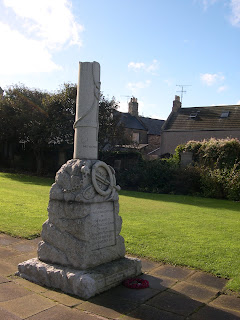 I'm staying in Eyemouth this week because we are approaching the anniversary of the terrible tragedy which hit the local community in 1881. This seems to be little known outside the area, at least I had never heard of it myself until I visited the town's museum, even though all the keen photographers I grew up with used to go to Eyemouth regularly to get their quota of shots of 'boats and ropes'.

As you can see on the memorial, the total death toll in 'the great east coast fishing disaster' was 189 and the great majority of those lost, 129 men, came from Eyemouth. This was about one in three of the entire adult male population of the town. Many women lost both a husband and a son, sometimes two sons. Those men who survived the disaster never recovered from the trauma of seeing so many comrades drown. The population of the town took a hundred years to get back to the level it was at before that day. 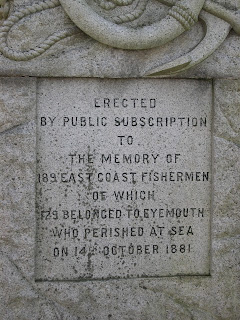 Soon after the fishing fleet sailed out of Eyemouth on 14th October 1881 a violent storm blew up. The wind seems to have been almost hurricane strength. The boats were battered to destruction. Attempts to return to harbour were hopeless in the face of such a wind, and all those boats which did try to return were driven onto the rocks known as the Hurkurs which surround the bay (shown in last week's post). Desperate relatives and friends of the fishermen tried to reach them but failed. In some cases women on shore watched their husbands and sons drown and were close enough to hear their cries for help. The only boats which returned safely were those which did not attempt to re-enter Eyemouth harbour during the storm. Some continued down the coast and were able to land at ports on Tyneside. One crew rode out the storm far out at sea  and finally returned home two days later when all hope for them had been given up. The skipper of that boat was so exhausted he had to be carried ashore. The next day he attended the funeral of his son who had been lost overboard from another boat.

This account is taken from a very good book about Eyemouth by Peter Aitchison,  a native of the town who had a successful career as a journalist. It was originally called Children of the Sea, but since tragedies have more sales power it has now been re-published under the title Black Friday, the term which came to be used to refer to the day of the disaster. Peter's chapter about the storm and its aftermath is one of the most harrowing historical narratives I have ever read. He sets out to answer the question of why the loss of life at Eyemouth was so much worse than in other places. The fishermen of most ports on the east coast stayed at home that day when they could see a storm brewing, but those at Eyemouth felt obliged to go to work. Some ports had better harbours which gave returning boats more shelter, but Eyemouth had no protection against the rocks, and was notorious for the shallowness of the water near shore which made it difficult for ships to return home on an ebb tide. Peter concludes that the answer lies in the archaic requirement to pay a proportion of the income from fishing to the church as a 'tithe', money which would otherwise have been paid as harbour fees and funded improvements to the port.

So the Church of Scotland seems to have been little loved by the locals, but there are other Christian organisations which have made a more positive contribution to the lives of fisherfolk. This is the building of the Royal National Mission to Deep Sea Fishermen located right on the harbour in Eyemouth. It provides practical help and emotional support to fishermen and their families. Read more about its work here. So many landlubbers have no idea how hard the life of a seafarer is. 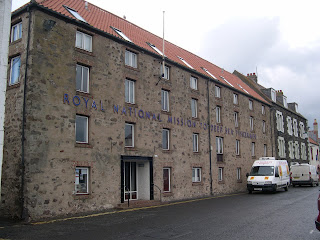