'Keep Calm and Carry On' 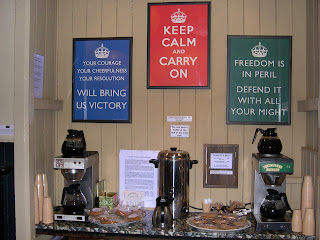 The success of the slogan 'keep calm and carry on' is truly extraordinary, and since the source of that sales phenomenon is within the range of this blog I thought I might as well bring you some pictures. Barter Books, 'one of the largest second-hand bookshops in the country', located in Alnwick's former railway station, seems to have become fairly famous now and doesn't need any help from me publicity-wise, but that's no reason to ignore it. Ten years or so ago when I was living in Alnwick I treated Barter Books as an extension of my living-room and was deeply fond of the place. That affection has waned somewhat since it became  a major tourist attraction and installed a full scale cafe. Back in the days when the only coffee available was from the jugs shown in the photo, I spent many bleak winter afternoons snuggled up by the open fire in the old waiting room reading or writing. Nowadays you might as well try to work in a railway station that's still  operational. 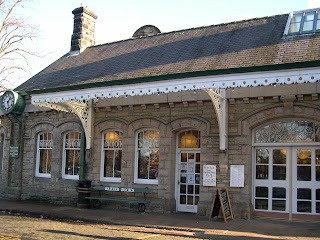 This is an exterior view which shows the design of the original station building. I can just remember catching a train there as a very young child in the 1960s. It was a victim of the 'Beeching' wave of closures and was subsequently bought and converted into a second-hand bookshop by Mary and Stuart Manley. And since then it's just got bigger and bigger. At some point around the turn of the millennium they found an original Second World War poster bearing the now famous slogan and framed it to hang behind the till. It was so much admired by customers that they started selling reproductions of it. The rest is history. I was an early adopter of the poster and when they introduced mugs I even bought one of those, but I drew the line at the tee-shirt and I've now thrown out the poster and the mug because I am absolutely sick of seeing variations on the slogan everywhere I go. 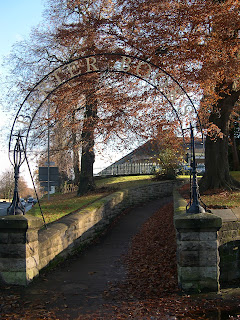 I think that the original success of the poster had a lot to do with the national mood following 9/11, a mood which intensified after the 7/7 bombings. The top photo shows the full range of reproduction posters now available. (The precious original is kept securely behind the counter where it's hard to photograph without a crowd of heads in the way.) When the green one first went on display a few years ago a fellow customer turned to me and said with perfect seriousness that 'freedom is in peril - defend it with all your might' was a poster we should all be displaying because it was just as true then as it was when the poster was first issued. I'm fairly sure that it was the government he regarded as the threat to freedom. A lot of us felt that way then. This may be why I've failed to warm to all those 'keep calm and go shopping' etc etc variations. The memory of that frightening period when the original poster seemed to speak to us very directly is still too vivid. But now that I'm in Berwick, I do rather like the cross border variations that have appeared. The last time I was in Glasgow I saw a mug bearing the official Scottish translation, which is 'och wheesht and get oan wae it'. My sentiments exactly.