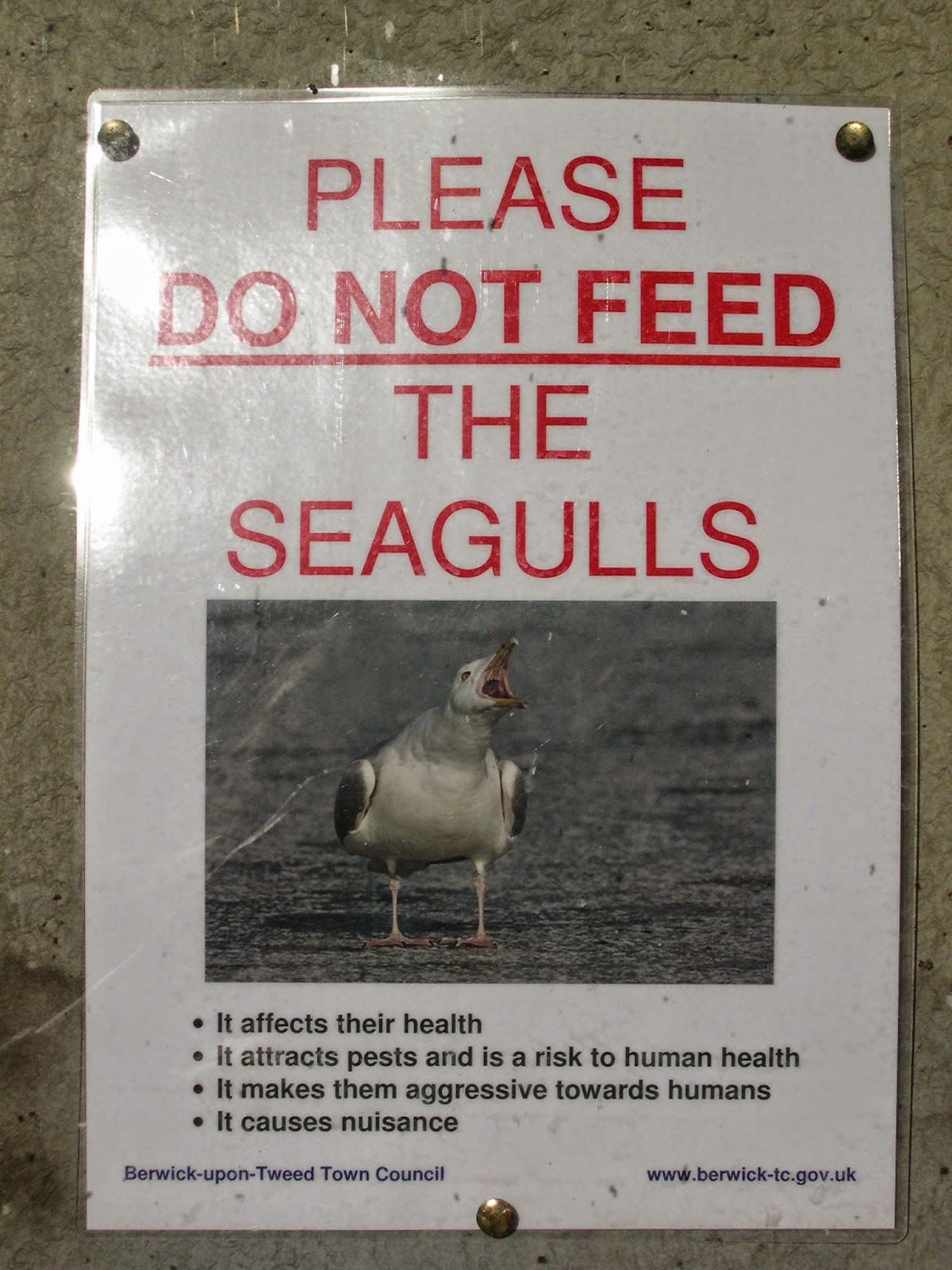 The footballer Eric Cantona famously compared scandal-seeking journalists to seagulls following a trawler to scavenge for tasty morsels of discarded fish. Here in Berwick we have a permanent problem with seagulls, leading to notices like this one being put up all over town to discourage sentimental visitors from feeding them. The gulls are not suitably grateful for being fed, they will just grab your own lunch as well and then dump the remains of their last meal all over you and your family.  In the last few days before the Scottish independence referendum, we now have a problem with metaphorical seagulls as well. Journalists and researchers of all kinds are circling Berwick in search of tasty soundbites, scavenging wherever they can, digesting whatever they are given quickly and badly and then dumping the messy end product all over the world’s media.

I have myself been guilty of feeding these seagulls. So far I have talked to two reporters and one doctoral researcher in addition to attending a local debate that was filmed for global distribution. Blame my fellow blogger Jim Herbert, who for some reason – probably because, unlike mine, his history blog both has a bit of scholarly gravitas and has the name Berwick in the title – seems always to be the first port of call for these enquirers. He has now decided that I am a reliable ‘rent a gob’ and put me on his list of opinionated locals towards whom to point anybody who emails him in search of  ‘some interesting people to talk to about what Berwick thinks of the possibility of Scottish independence’.

I have now started to get quite angry with these enquirers. None of them seem to have bothered to do any research on the history of Berwick or the Borders in advance. The man from German radio was the least annoying of the lot, because as a foreigner he was prepared to listen and did not assume he knew it all already. My main gripe with that interview was that he asked us whether we thought Scottish independence would be good or bad, without distinguishing between ‘good for Scotland’ and ‘good for Berwick’, which are two very different things.

The PhD student particularly irritated me, because I’ve done academic research myself, and if I were her supervisor I would have been telling her to re-examine her starting assumptions. She told Jim that she only wanted to talk to English people, because her paper is about what English people think of Scottish independence. This forced him to try to remember which of his friends and contacts in Berwick are Scottish and which English, because in daily life in the Borders we often do not consciously notice who is which. Some of the people who did turn up said that, for example, they were born in Scotland but educated in England and now live in Berwick, and were not quite sure whether they were English or Scottish. We tried to explain that the whole idea that Berwickers feel English and define themselves in opposition to the Scots is fundamentally mistaken, but I had a feeling that this won’t make it into the final paper.

A couple of days ago Jim obliged a chap from the Wall Street Journal, no less, with his ‘rent a gob’ list. I was really looking forward to talking to him. At last, I thought, a serious and prestigious newspaper, whose staff will be well briefed!  No, this chap’s ignorance of the history of the Borders was just as great as anyone else’s. He asked if anybody here wants Berwick to be independent of both England and Scotland. Oh yes, I said, you hear that quite often. He then asked if I thought that could ever come true, or if it was just a fantasy. I pointed out that historically Berwick WAS an independent political entity, for hundreds of years. This appeared to surprise him. Surely he is being well paid to google this kind of thing?


All of these soundbite-scavengers start from an assumption that we in Berwick and North Northumberland feel just as English as they do in London or Surrey. Or if not, that we must have a permanent identity crisis. They don’t understand that we do not live our lives in an agony of confusion over whether we are English or Scottish – our identity is being Borderers and we are not in the least confused about that. They are surprised when we say that we interact with Scots all the time and feel closer to them than to the Southern English. They don’t understand that the shared history and culture of the Borders goes back to way before the Acts of Union and that whatever national politicians do we will deal with it, because that’s what Borderers have done for a thousand years. And most of all they don't realise how much we would like them to take some notice of us the rest of the time and not just in this once in a lifetime event of the referendum.

P.S.  After I had posted the above, I was stopped in the street at 6 pm by a reporter from the Newcastle Journal desperate for some quotable Berwickers to meet her deadline. I appeared on their website the next morning, with all my more considered remarks ignored in favour of the angle that 'Berwick estate agents are cockahoop as Scots seek English address to avoid higher Scottish taxes'. I would never use the word 'cockahoop' and the estate agent to whom I have most recently spoken is a very strong Better Together man who opposes increased powers for Scotland even though it might be good for his business. One of the lasting legacies of this referendum experience for me will be an increased dislike and distrust of journalists.