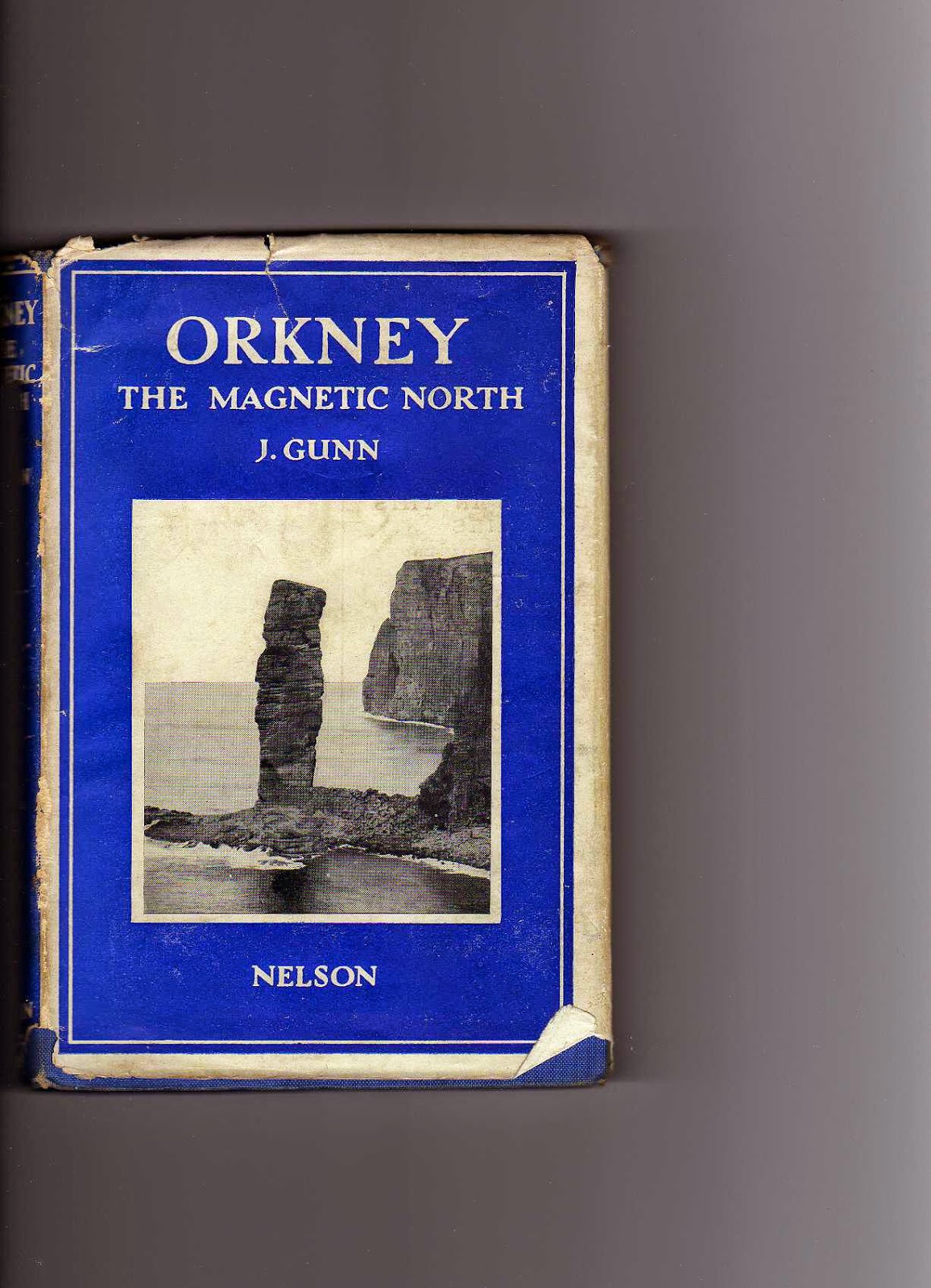 This is the cover of a guidebook to the Orkney islands published in the 1930s. My uncle bought it while serving in the Orkneys during WWII.  He sent it to his parents as a present, writing in the front “from your loving son serving with the RAF in these lonely islands, June 1944”.  I have screwed up my eyes many times trying to decide whether that word is ‘lonely’ or ‘lovely’, and am still not certain. Either would be appropriate, but the former seems more likely to be the adjective of choice of a young conscript missing his home.

That was the only contact any of my family have ever had with Orkney – I am ashamed to confess that I have never been there. One of my relatives in New Zealand is convinced that the original bearers of the surname Housby came from Denmark via Orkney and that there is some sort of ancestral estate of ours in the islands, but more reliable scholarship tells us that most –by Danish surnames entered Britain via Yorkshire, and in any case, my uncle had plenty of time to look around in 1944, and I think he would have mentioned it if he had stumbled across a swathe of acreage bearing his own name.

This blog is, of course, about the area on either side of the Scottish-English border, but now that I have had time to digest the results of the indyref in more detail, I have realised that the Orkneys have something in common with the Scottish Borders. Both local authority areas returned a No vote of 67% in the referendum, a much more decisive No Thanks to independence than in the rest of Scotland.

The result overall, when votes from the whole of Scotland were combined, was 55%  for No, but that disguises some sizeable local variations. The now much criticised opinion poll that showed 51% for Yes was actually an under-estimate of the vote in Glasgow, which voted  nearly 54% for Yes. Glasgow itself and the two adjacent authorities, plus Dundee on the opposite coast, were the only areas to return a majority Yes vote, which is a pretty clear indication that it is the former heartlands of the labour movement, now struggling with de-industrialisation, that have given up on the Labour party and sought salvation in independence.

The decisive rejection of independence in the Borders is in accordance with the anecdotal impression I had formed, and is what you would expect from the region whose daily life would have been most seriously disrupted by the appearance of an international frontier on its doorstep. It may in fact be more noteworthy that 33% of voters still thought it was worth risking this inconvenience. But why should the Orcadians have shown themselves equally averse to the prospect of an independent Scotland?

In their case, it seems to be because they do not consider themselves to be really part of Scotland at all and do not wish to become even more dependent on it.  The Orkney islands used to belong to Norway but were ceded to Scotland in 1468 as part of the dowry when the daughter of King Christian 1, who ruled both Norway and Denmark, married King James III of Scotland.  Princess Margaret’s royal dad was short of ready cash so pledged both the Orkney and Shetland (64% for No) islands in lieu. According to this 1930s book, the islands are still technically ‘pawned’ and may be redeemed by Norway at any time, but "Orkney folk know which side their bread is buttered and so prefer to stay with Scotland". Hmm. That was before Norway accumulated a whopping sovereign wealth fund from oil revenues.

The Orkney and Shetland islands are still even more strongly Scandinavian in language and culture than the northern mainland of Scotland and quite a lot of their inhabitants would apparently like Norway to redeem its pledge. There are also reports that some Orcadians are now demanding a referendum of their own on becoming completely independent. Berwick upon Tweed, of course, used to belong to Scotland but was conquered by England. A lot of its residents think it would be better off going back to Scotland or even becoming independent. The population of the Borough of Berwick is only slightly smaller than that of the Orkney islands. Maybe we could work out some sort of deal whereby Berwick is returned to Scotland while Orkney is returned to Norway?