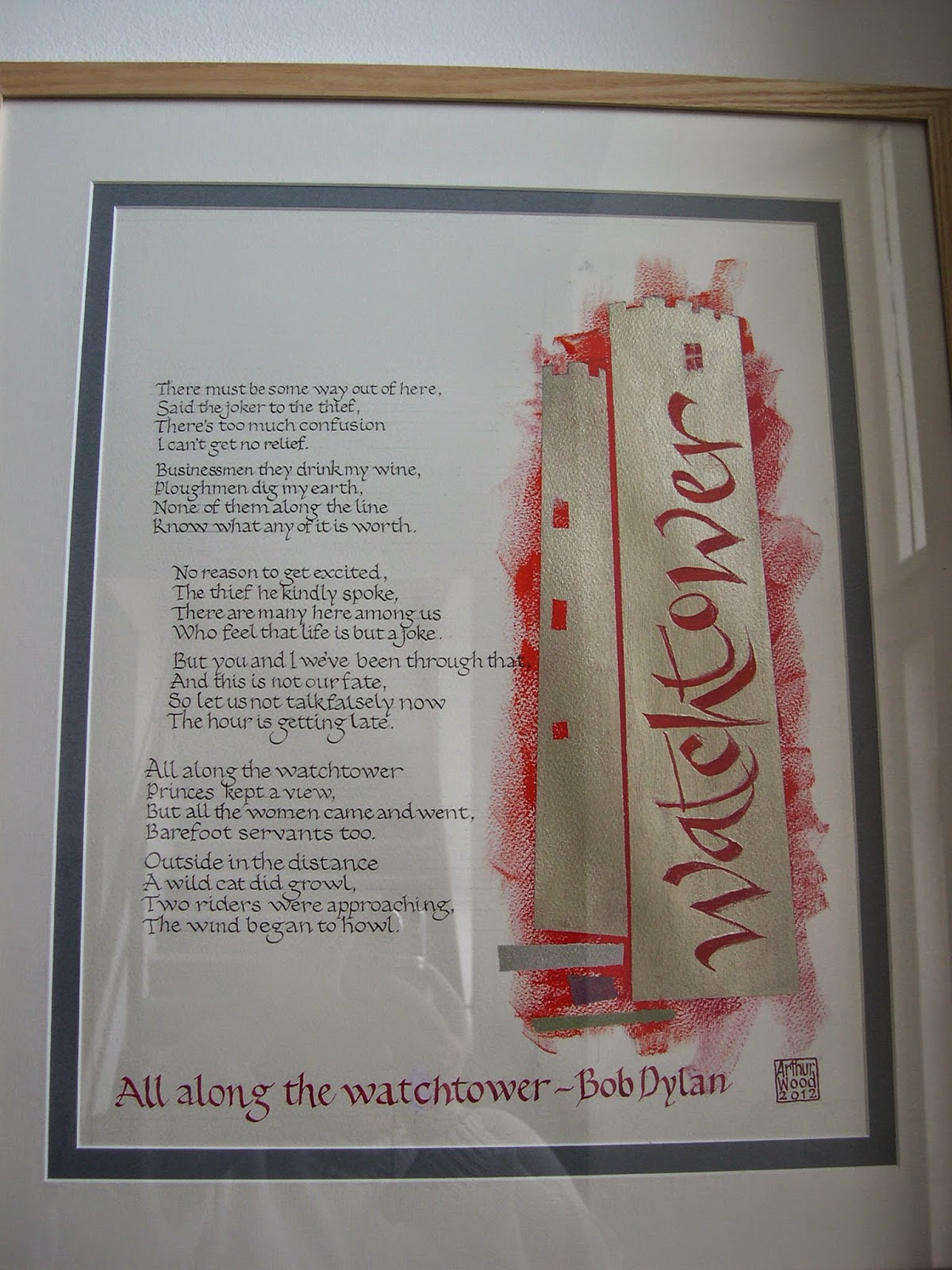 This fine piece of calligraphy was created by local artist Arthur Wood for the Watchtower art gallery here in Berwick. The picture loosely evokes the building housing the gallery (originally a church) and the text is of course the lyrics of the classic song All Along the Watchtower. As I gazed at it during my most recent visit to the gallery, it occurred to me that the lyrics describe the current political situation in Berwick with an almost uncanny accuracy.

There must be some way out of here
Said the joker to the thief
There’s just too much confusion
I can’t get no relief.

There is an awful lot of politics going on here just now, and all of it is confusing. The impending referendum on independence for our friends on the other side of the Scottish border would be quite enough on its own.  Indeed, it was reported this week that cinemas in Scotland have decided to stop accepting advertisements by either side in the independence debate, because movie-goers at the end of their tether have complained that they go to the cinema to get away from the saturation coverage of the wretched referendum.

Then, on 22nd May we had elections for the European parliament. As usual only about a third of the electorate turned out to vote in these, but the ones who did seem to have been motivated by an extreme level of fed-up-ness with the present government and all its local associates.  The UK Independence Party (whose only real policy is leaving the European Union) gained the most votes of any party nationally and came second after Labour in this area.  Under the peculiar voting system used for the European elections whereby MEPs are parcelled out in job-lots of three per large region, North East England now has two Labour and one UKIP members of the European parliament. Both Conservative and Liberal Democrats, who historically have behaved as if North Northumberland were a football to be passed between the two of them and all other parties were playing in some lower league, sank to ignominious third and fourth places.

The way that the debate over EU membership relates to the debate over the future of the UK is brain-torturingly hard to follow, especially for Scots. Basically: if you are a Scot who wants to stay in the UK but leave the EU, you vote UKIP; if you want to leave the UK but stay in the EU, you vote SNP; if you want to stay in both the UK and the EU you can vote for any of the three older parties; and if you want to leave both the UK and the EU, you currently have no major party to vote for. Meanwhile, those of us just over the English side of the border put our heads in our hands and just hope that none of the possible permutations of outcomes involve building a big wall across the motorway.

With all this going on you might think that members of Berwick Town Council would be gravely concentrating on the bigger picture and putting aside individual differences in a manner befitting the local government of a community on the front line of the most important political questions of our time. Instead, they have just plunged themselves into an extraordinary piece of in-fighting that to an outsider displays a combination of viciousness and pettiness that only very small towns can manage. I don’t wish to get into the details and personalities, merely to reflect that the town council appears to do almost nothing of any importance but to take itself with a seriousness inversely related to its usefulness. Some of its members are now calling loudly for the council to be dissolved pending new elections. This would seem to be a rather risky strategy - they might find that nobody missed it.

And just to round it all off, someone has written to the local paper suggesting tongue-in-cheek that, given recent unfortunate events in that country, the question of whether Berwick is still at war with Russia ought to be clarified as a matter of urgency. This hoary old story dates to when Berwick was a separate legal entity; the declaration of the Crimean War  listed 'England, Scotland and Berwick upon Tweed' as belligerents but the peace treaty concluding the war allegedly mentioned only England and Scotland.


I wouldn’t want to suggest (honest, m’lud, I wouldn’t) that any politicians - locally, regionally, nationally or internationally - are ‘thieves’, but a right pack of jokers they most certainly are.
Posted by Elaine Housby