At Last, a Serious Political Debate in Berwick 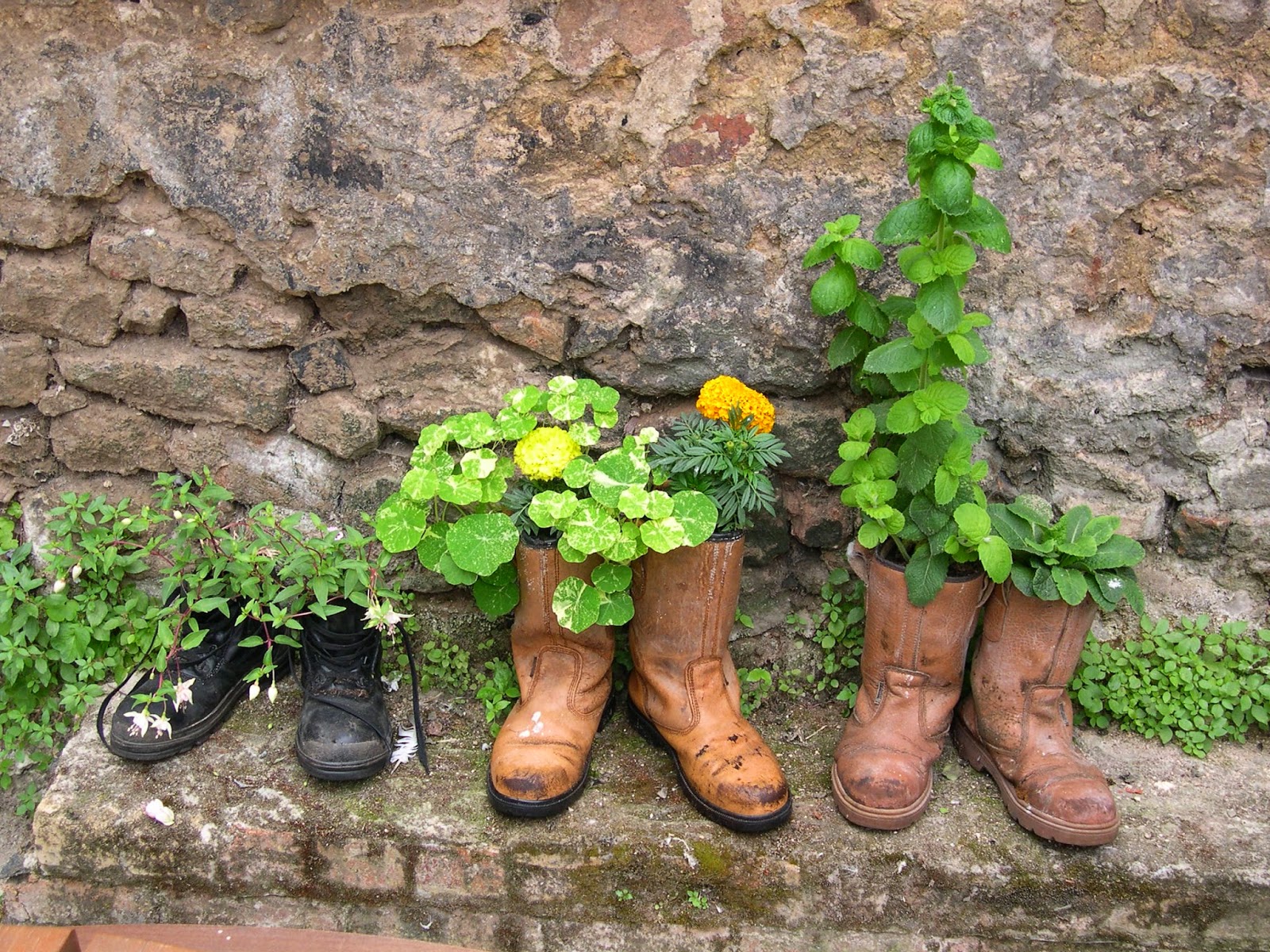 I live very close to Berwick youth hostel and go to its excellent cafe quite a lot. The manager, Sion Gates, is an able and energetic young man and has now pulled off something of a coup by organising the only public debate on the implications of the Scottish independence referendum for Berwick, in the said cafe. Many thanks and congratulations to him for swimming against the tide of political apathy engulfing Berwickers, many of whom seem like they won’t notice there’s anything out of the ordinary going on until the day they find their shopping trip interrupted by a police checkpoint.

I took this photo last summer in the hostel’s courtyard. At the time I just thought it was cute but now it kind of looks like a metaphor for different political institutions growing out of different ideological old shoes .... or something 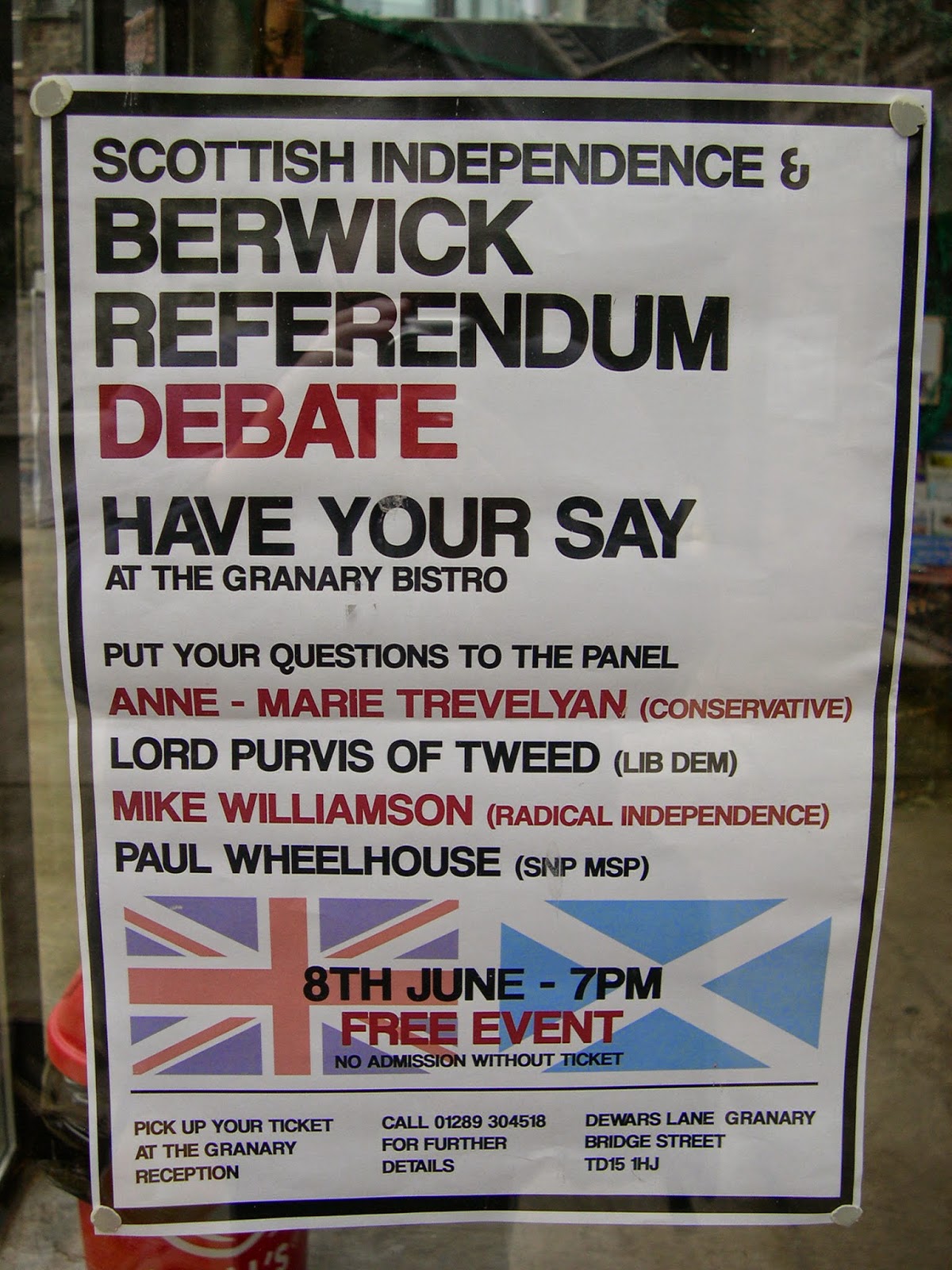 At 6.40 last night I crossed the courtyard, showed my numbered ticket (no. 5 out of 110, I am very proud to report) and was in plenty of time to get a seat near the front.  My dominant impression of the evening is of the sheer pleasure of being in a room full of people who were all serious about and engaged with current events. The tone of the debate was heated but good-humoured.

The speakers were, on the No side, our Conservative candidate for the next Westminster election and a LibDem former MSP for the area just north of the border, and on the Yes side, an SNP minister in the Scottish government and some bloke from the Radical Independence Campaign. For full details see this photo of the poster.

I have to say that I was not impressed by the RIC guy, who delivered the same sort of Left-Green speeches he has probably given a hundred times before with no real concession to the fact he was now on the other side of the border. The SNP minister, though, impressed me – he was personable and well briefed and managed to sound like he really cared about the English borderlands. The two No speakers both came across as very committed to the entirety of the Borders and they emphasised the sheer uncertainty of most of the variables involved and the impossibility of knowing exactly how Berwick would be affected by independence.

Unfortunately for Mrs Trevelyan, however, her position was undermined by her own party leader just last week, when David Cameron promised to give the Scots powers to set their own taxes even if they vote No. Since he worked hard to keep this option off the ballot paper, conceding it now makes it look as if he has been out-manoeuvred by the nationalists, and the SNP speaker last night correctly pointed out that it is simply ‘dishonest’ for any unionist to claim that the status quo is an option any more. I think myself that if Scotland raises income tax we would see a welcome flight of working people into Berwick, but most questioners last night were more concerned about the negative implications of Scotland reducing corporation tax to attract more investment.

The debate was chaired by Jim Herbert, a local historian whose blog Berwick Time Lines is linked to in my side-bar. It took me a while to recognise him because it was the first time I’ve seen him wearing a suit. (Sorry Jim.) He gave an introductory sketch of the historical background to Berwick’s unique situation, which included the suggestion that we may now be seeing a return to the position between 1603 and 1707, when the monarchies of England and Scotland were united but their parliaments and legal systems were not. I have never heard it put like this before and there is something reassuring about having Scottish independence presented as a return to a past situation rather than something radically new.

Except of course that in 1603 there was no European Union .... The Yes campaign believes that the idea that an independent Scotland would not be allowed to join the EU in its own right is mere posturing and bluff, and that the EU is desperate to keep countries in it at all cost and won’t let them leave if they try. I agree with this myself. However, I felt that the Yes speakers ducked the question of what will happen if a re-admitted Scotland is forced to join the Schengen common travel area while RUK stays out. That’s when the police checkpoints would pop up just north of Berwick’s largest supermarket.

The  most reassuring thing I gained from the debate was the panel-wide assurance that Berwickers will still be able to use Scottish health facilities. Since our nearest general hospital is north of the border, this has been a big worry locally. The SNP  minister stated unequivocally that the plans for an independent Scotland include a commitment to the maintenance of cross border health services, free at point of use, just like now.  So, as one questioner forcefully explained, we now only need to persuade the two national ambulance services to transport patients across the border, which they usually refuse to do even at present.

At the end Jim asked for a show of hands for and against independence for Scotland. The vote was pretty much evenly split, but since I know for a fact that there were some committed Yes supporters from north of the border in the audience, it was not an entirely fair vote. He also asked whether anyone would support independence for Berwick and a number of hands went up, including mine. I do seriously believe that the best option for Berwick would be to become a tax haven in the manner of the Cayman Islands  Pity we don’t have their climate
Posted by Elaine Housby