I Hate to Keep Going On About This, But When Can We Expect the Barbed Wire? 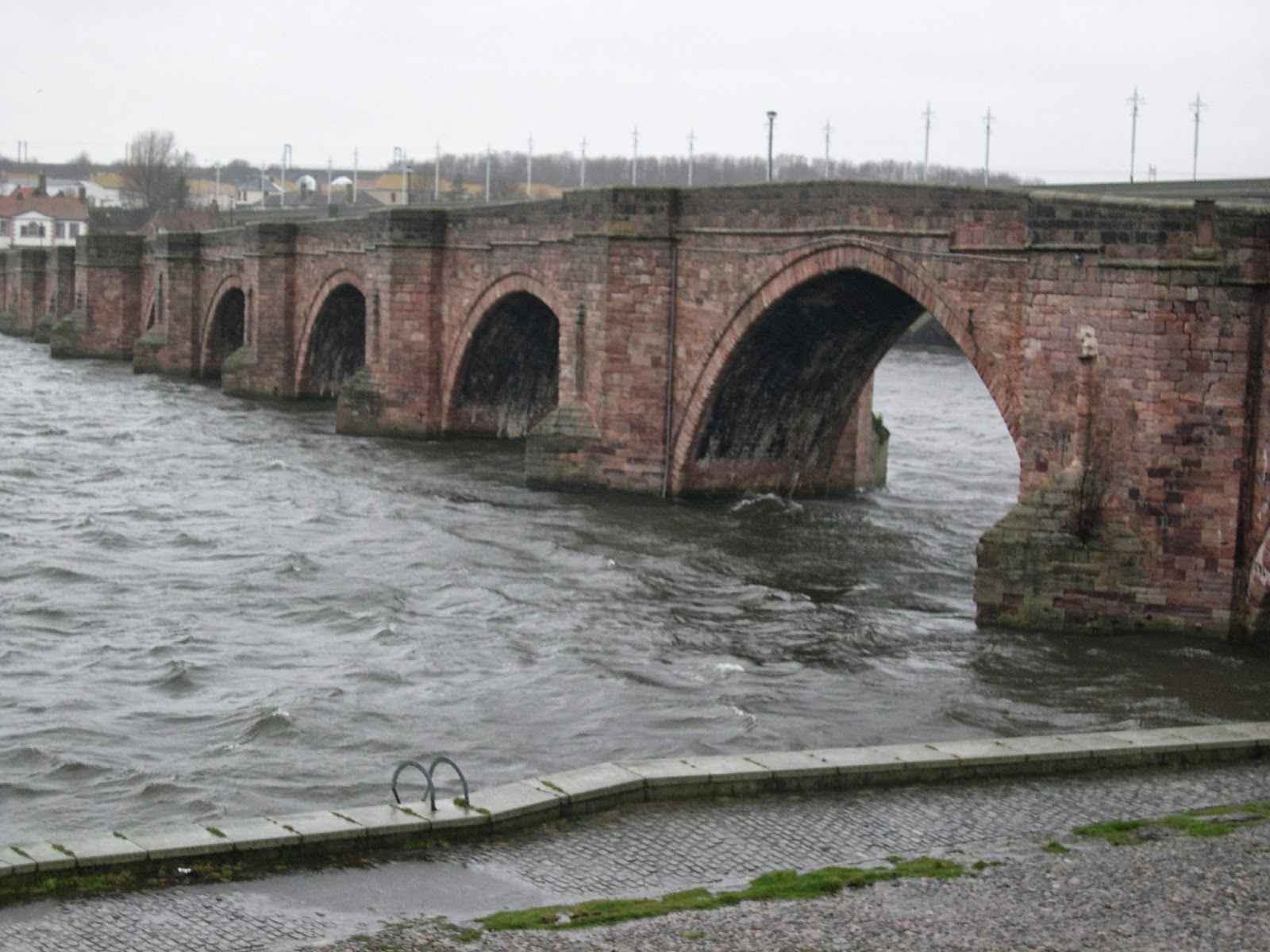 This is the Old Bridge in Berwick-upon-Tweed at high tide during one of the wet, windy, miserable days we've had a lot of recently. Though not nearly as many of them as the poor people in the south of England have been having. I had a vague idea that this would be a suitable picture to illustrate a post on the theme of 'choppy political waters ahead'. Go on, groan as much as you want.

Now that the referendum on Scottish independence is only - quick count on fingers - about seven months away, Westminster politicians and the London based media have started to take it seriously. Last week there seemed to be a major attack on independence by a politician and an earnest 'whither the UK' piece on every news programme. I got rather irritated at the way the rest of the world seems to have only just thought of the issues that have been bothering those of us who live on the border for years. Well - they've been bothering me for years at any rate, and if you've been reading this blog you will be well up to speed on the issues.

I've already done at least two posts showing the bridge across the border at Coldstream as an accompaniment to questions about whether this is really a defensible frontier that could cope with being the border of the European Union. The bridge at Berwick is not the border any more but I may as well continue the theme. Everyone in Westminster is threatening the Scottish Nationalists with the alleged impossibility of staying in the EU if they leave the UK. So is some EU commissioner whose name I forget. From where I'm sitting, this looks like pure gamesmanship. There is no way that any EU commissioner who had visited Berwick or Coldstream or Norham or Paxton would be prepared to allow these towns to become the edge of the European Union. It would mean turning sleepy, remote villages into armed camps and erecting miles of barbed wire across rivers. I am quite certain that a newly independent Scotland would be fast-tracked through the process for re-admission in its own right, however many backstairs deals would have to be done to get all the member states to agree.

I am now more interested in the scenario raised by an expert from LSE, whose name I also forget I'm afraid, on Radio 4. He pointed out that all new member states of the EU are obliged to join the Schengen agreement, which allows free travel on a single visa through all states that are signatories to it. At present the UK is not a signatory. So that raises the prospect of England-'n'-Wales, or Rest of UK as the Scots call it, outside Schengen and a newly independent Scotland within it. Leaving Berwick and all the rest of the border towns as the new frontier of the free single visa travel area, which is only marginally better than being the frontier of the EU altogether. It would still turn us into a heavily policed land border between significantly different political entities, whereas we are now a border marked only by a couple of cheery flags and welcome signs.

I know that Holyrood can't really be expected to care about the English side of the border, but I would have thought that they would care about the impact on the Scottish border towns. If only because their inhabitants have votes in the September referendum.