My previous post may have led some readers to believe that there has been enmity between the Housbys and the Percys for generations. Not so!  My grandparents were present in Westminster Abbey for an equally spectacular Percy wedding back in 1939. My grandfather was chairman of the local council at the time and in this capacity got to go to many interesting events.  Lady Diana Percy was married to Viscount Brackley in grand style only a few months before the outbreak of World War II. 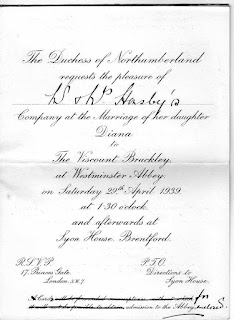 The yellow card below is the golden ticket that actually got you into the Abbey, the larger white document is the formal invitation. On the inside are directions to Syon House, where the reception was held. This is the Northumberlands' official London residence, though it's actually in Brentford. Well, that's what this 1939 invitation says, anyway, though in modern times the rather downmarket associations of Brentford have led the custodians of the house to prefer to describe it as 'in West London' or 'just across the Thames from Kew Gardens'.

The lower picture in this newspaper cutting shows an elderly woman wearing the traditional costume of Cullercoats, an old fishing village that is now a suburb of Newcastle upon Tyne. My grandmother has written on one of the cuttings that they saw Mrs Donkin seated in the Abbey in her fishwife's outfit. One wonders what the high society guests made of her. She must have been one of the last women to wear this costume 'for best'.

The imminence of war lends poignancy to these mementoes of a happy occasion. My grandmother has also written on the cutting that the wedding reception at Syon House was the last time they saw the young Duke of Northumberland, brother of the bride. "He was killed at Dunkirk." 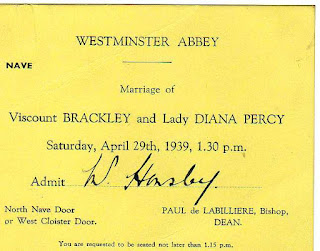