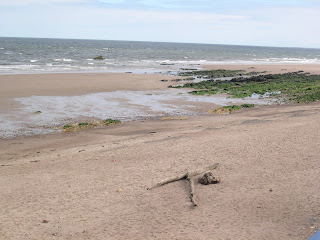 This week I've decided to big up Spittal, a village semi-detached from Berwick that never seems to get as much recognition as it deserves. It has one of the best beaches on the Northumbrian coast and yet hardly anyone is cashing in on this. The sum total of the facilities available in Spittal, other than pubs, is one cafe, a shop which is closed on Sundays, and one grossly inadequate set of public toilets. Meanwhile Berwick itself is awash with coffee outlets, probably  more than it can sustain. If I had a wodge of capital to invest in a business, I would be setting up a rival cafe in Spittal. 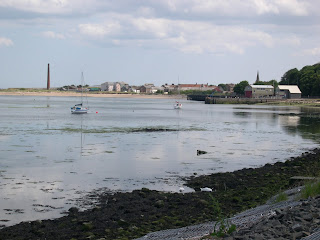 Spittal Gala is taking place this weekend and the publicity for it in the local paper made me think. The paper commented that this annual festival is usually assumed to have its origins in the fishing industry, as with the Tweedmouth salmon festival, but that in fact 'galas' are always associated with mining. And Spittal was indeed a mining town in the past. A 'directory' of Northumberland published in 1855 says that the inhabitants of Spittal are 'mostly fishermen and pitmen'.  This is a valuable reminder that mining was not confined to stereotypical 'it's grim up north' style towns. In some parts of Northumberland the coal seams extend under the sea and so some pit villages are on the coast. Spittal used to have extensive factory operations as well, but the big chimney seen in the photo is now the only survivor of those. It is a much loved landmark, the sign of being back home when seen from the window of the train. Certain interest groups would like to knock it down and cover the whole of the Point with houses. N-O-O-O!  Another suggestion is to cover the chimney in some sort of shiny cladding so it looks like a space rocket. I quite like that idea.

The heritage industry (which, as regular readers will have gathered, I dislike) seems to have trouble processing such conflicting images. A place can be branded as a picturesque fishing village or a family-fun seaside resort or a former mining community or a former industrial site, but not all of them. Spittal is a wonderful miniature example of how real communities just do anything they need to do to get by and have fun whenever they can as well.  Shine on, you crazy chimney. 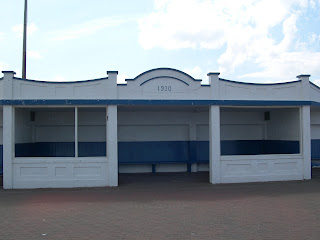