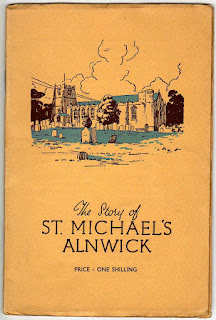 I can't believe I don't have any photos of St Michael's Church, Alnwick, but I don't. Apparently it was such a taken-for-granted part of my life for so long that I never bothered to photograph it. So instead I have scanned the cover of an old guidebook to show you what it looks like. This serves the additional purpose of proving that my family has been involved with St Michael's for a long time. Observe the pre-decimal price.

I was christened in St Michael's church and the funeral services of both my parents and of many other people I was close to were held there. So as far as I'm concerned, this is my family church. The Duke of Northumberland, his heirs, successors and hangers-on, are at liberty to regard it as their family church as well, even though their attendance is generally limited to turning up on Christmas Day and sitting in a row in the special ducal seats down the side of the chancel, at a right-angle to the rest of the congregation and featuring comfortable cushions and fancy wood carving that the rest of us have to do without. And since they are formally resident in the parish they are entitled to hold their weddings there, even if they do spend a lot of time out of the parish, at their London residence or at their private home in the Scottish Borders, purchased reportedly as a bolt-hole to escape the visitors to Alnwick Castle whom they expect the rest of the town's inhabitants to welcome with open arms.

Do not, however, expect me to be unequivocally thrilled when one of the Percy daughters gets married in St Michael's church wearing a dress that I'm guessing probably cost as much as some families in the parish earn in a year and invites half the royal family to be her guests. All I know so far about yesterday's 'society wedding' in Alnwick is taken from grudging peeks at the website of the Northumberland (for which read Alnwick) Gazette, which in relation to the Percy family habitually displays a degree of fawning adulation for an unelected local leader seldom seen in a newspaper outside North Korea. If you want to see the pictures, go ahead, click on this link, because you won't see any of them on this blog. During the preparation (for which read massive hype and tourist promotion) for the wedding the paper was reporting that the family hoped the whole town would see it as 'their' wedding. Given the level of security necessitated by the number of royals present, I can't see that this can mean much except that they were all encouraged to stand for hours in indifferent weather waiting to cheer as the procession of their betters walked past. But to be fair, there was a firework display at night to reward them. The ducal family are well known locally for their fondness for very large, very loud and very late firework displays.

A few years back the oldest Percy son modelled for a statue of Harry Hotspur, the scion of the family immortalised by Shakespeare. I made a point of being out of town for the unveiling ceremony. In fact I went to Paris for a few days, where I stood in the Place de la Bastille and sang a few snatches of  La Marseillaise and Ça Ira, two songs of the French Revolution. (Don't worry, the Parisian traffic was far too noisy for anyone to be able to hear me.)  Since then I have taken the more constructive step of  leaving Alnwick permanently. At the time Lady Melissa was walking down the aisle I was sitting in a park in Berwick enjoying performances by a string of great local bands, congratulating myself on my good sense in moving out of the feudal zone.

When my mother died some close friends of our family planted a tree in her memory in the churchyard of St Michael's. I like to think that some of the HRH-es may have thrown it a passing glance. I'm sure it will grow better after the light of the royal countenances has shone upon it.

P.S.  Some time after writing this post I visited my friend Margaret in Alnwick. She is a church warden at St Michael's and in this capacity she could have been present at the wedding service if she had so wished. Instead, she announced that she was sure her fellow wardens could manage without her and took herself off to visit her family on the other side of the country for the weekend of the celebrations. Respect!
Posted by Elaine Housby