A Tweedmouth Gravestone Links British Past and American Present 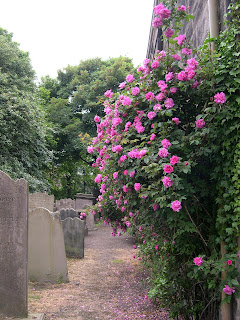 Summer is here at last and the roses climbing the wall of Tweedmouth parish church are in full bloom. There is something about the combination of living plants and ancient graves that gives old churchyards their charm.

There are many interesting headstones in Tweedmouth churchyard, enough to supply material for several blog posts. This time I would like to say something about the small stone shown below. It was pointed out to me by my friend Priscilla, who is very knowledgeable about the history of North Northumberland and tells me something interesting every time I see her.

The writing on this stone is only just legible and the date of death has sadly now sunk below the level of the soil, but it is certainly one of the oldest stones in the churchyard and probably no later than the early 18th century. 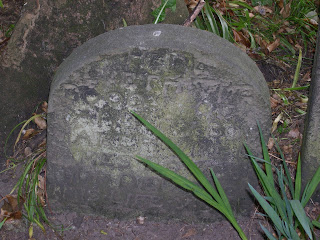 If you can get your zoom cursor onto it you should be able to confirm that it says 'here lies the boody' of the deceased, with a double O, rather than 'body' in the modern spelling. My friend thinks this just indicates that the stonemason was poorly educated. I prefer to believe that it represents the actual pronunciation of the word locally at that time.

I had to study Shakespeare's play Henry IV (part 1) for my English O' level, and I remember the notes to the book explaining that the reason so many of Shakespeare's jokes are just not funny any more is that the shift in pronunciation of some words means that his puns don't always work to a modern ear.  In Act I Scene 2 Falstaff refers to himself and his dodgy mates as 'squires of the night's body'. The notes explained that this is a pun on 'knight's body', a squire of the body being a recognised role in a knight's household, and 'night's booty', Falstaff and his cronies being practised highway robbers. This pun was not, according to these notes, as strained as it seems now to us, because to the contemporary audience the words 'body' and 'booty' sounded almost identical.

I then forgot all about this for twenty years or so, until I saw the film Boyz in the Hood, which at the time was innovative in its depiction of young African-Americans in Los Angeles. The way they used the word 'booty' reminded me of Falstaff. Since that film came out the term has spread into general slang on both sides of the Atlantic - as in the famous Beyonce 'booty shake'. In this usage the word 'booty' means, of course, 'body' in a specifically sexual sense.

I want to assure my American readers that, while you may be more familiar with the regrettably snobbish attitude adopted by many Brits to 'Americanisms' in speech, there are also plenty of Brits who are fascinated by the way that modern American English has preserved features of older British English which have now been lost in the country of their origin. I would love to think that there is a direct line from the 'boody' lying in an 18th century grave on the English-Scottish border to the flamingly alive 'booty' of Beyonce and her compatriots.

P.S.  A few months after I wrote this post, the graveyard was given a clean and tidy-up and as a result the lower part of this stone is now visible. The date of death appears to be 1714. 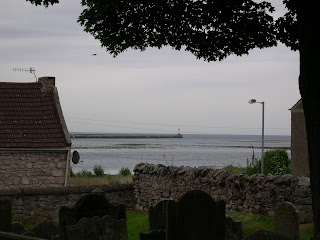