A Wonderful Tribute to Salmon Fishing on the Tweed 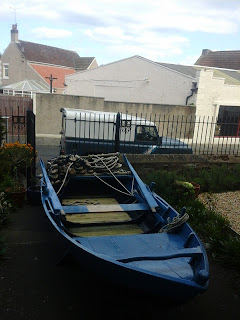 Hello again. It's been a while since I wrote on this blog, because I've spent the last eighteen months being nomadic. But my heart will always be in the Borders (as indeed are most of my belongings, in a storage unit). I was back in Berwick last week to catch the closing days of a blockbuster exhibition at the Watchtower gallery, run by my friend Kate Stephenson. This place has been an important part of my life ever since it opened a few years ago, and I try to attend every show there. Some shows are visited only by other people who dutifully go to everything artistic in the area. But the one that's just closed was, according to Kate, packed out every day. Indeed I heard people talking in the street about how good it was before I even got there. 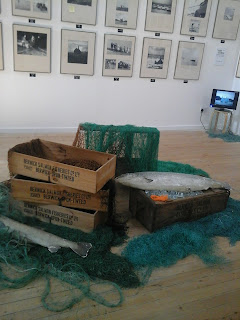 Because this was a show about the history of net fishing for salmon on the Tweed, a subject very close to the hearts of many people locally. Unlike the fancy angling indulged in by toffs further upriver, net fishing from a small rowing boat is a very ancient, almost primitive, way of catching fish that tends to move people to raptures about the disciples doing just the same thing on the Sea of Galilee. There is something really primal about the elemental struggle of man versus fish, the respect for the fish that comes from knowing their ways intimately, balanced against the need to kill them in order to eat. 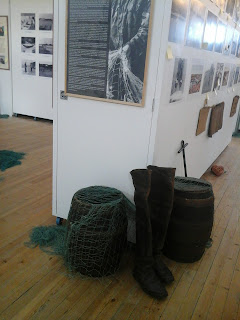 All of the original photos taken by Jim Walker for his books on the industry, By Net and Coble and A Wake for the Salmon, were on display, and I got another chance to talk to the man himself. He takes the view that the net fishers were deliberately put out of business by the upriver angling interests, who charge a great deal of money for the privilege of rod fishing for salmon and don't want the common netters competing for the fish. Certainly, the end of the Berwick Salmon company came in suspicious looking circumstances; it was bought out by an outfit calling itself the Atlantic Salmon Conservation Trust, which then shut the whole thing down, leaving the crews unemployed, without any compensation. If anybody feels libelled, take it up with Jim, not me. 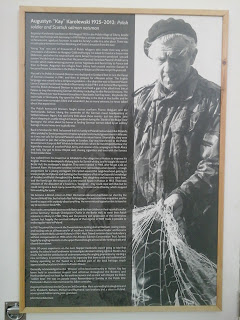 One story that was completely new to me was that of the man whose obituary is on this poster: Augustyn Karolewski, Polish soldier and Scottish fisherman. After escaping from Nazi occupied Poland as a teenager and fighting with the Polish forces based in the UK, he settled in the Scottish Borders, married a local lass, and spent the rest of his life fishing on the Tweed, enjoying, according to this obituary, the respect and affection of all. This is a lovely and timely reminder of how much we Brits owe to the Poles who did so much to help defeat Nazism, and how badly we betrayed them in 1945. I suspect that after Brexit modern Poles will survive without Britain a lot better than we'll survive without them.