Thoughts on Recent Travels in Scotland This is a pretty cute map of Scotland (Alba) with Gaelic place names, produced by some school children in Obar Dheathain, or Aberdeen as it is more commonly known, and on display in the train station there. I recently ventured up to Aberdeen, the furthest north I have ever been. It's at 57 degrees of latitude north and at this time of year, blimey, does it get dark early. It was here that it really hit me for the first time that Scotland is much closer to Scandinavia both geographically and culturally than England is. Of course the Scottish independence lobby are working on cultivating these links for all they're worth. Though First Minister Sturgeon has recently been much mocked for attending a conference of nations bordering the Arctic Circle, which Scotland conspicuously does not. I mean, even in the middle of winter the sun does rise for a few hours in the north of Scotland.

The main street of Aberdeen is called Union Street and there is also a Union Bridge and a Union Square, the last now taken over by a large and glitzy shopping mall in which to while away some of the hours of darkness. It's clear that Unionism was much in vogue at the time the Granite City was built. So it is appropriate that it was here I first encountered the campaigning end of the anti-independence lobby. 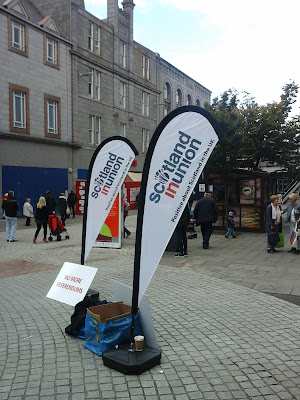 There was Scotland in Union, neutral between political parties but 'positive about Scotland in the UK', and opposite them in the central square, the Conservative party, explicitly demanding 'no second referendum' on independence and filled with spluttering dislike of and anger towards 'that Sturgeon woman'. The non-aligned faction seemed unhappy about the Conservatives getting in their space, probably conscious that association with that party has done enormous damage to the Unionist cause.

One of their leaflets is shown here. The view that the SNP government is concentrating too much on demanding ever more independent powers rather than on making good use of the ones they've already got seems to be widespread, and so does the feeling that the indyref was a horribly divisive experience that few people are anxious to repeat. We in England have had a taste of that with the Brexit referendum, which also divided families and friends. Now imagine having had to go through both those bitterly divisive campaigns in less than two years. And now imagine that your government wants to do the whole thing again a.s.a.p. 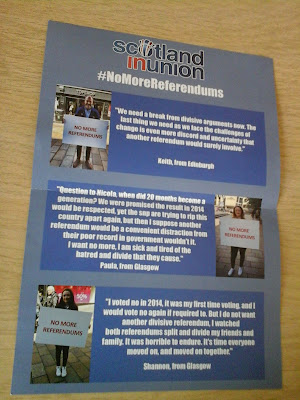 The timetable is reportedly now looking very tight indeed for the Scottish government to be able to transition seamlessly from EU membership as part of the UK to EU membership as an independent nation. Now that the UK PM Theresa May has announced she will trigger Article 50 early in 2017, Scotland would need to hold a new referendum on independence that returned a Yes majority not much later than that. Otherwise it will have to leave the EU along with the rest of the UK and then start all over again after independence at some unspecified time in the future.

The problem for Nicola Sturgeon is that the opinion polls are still showing a clear majority against independence. Though, with opinion polls now thoroughly discredited after their lamentable failure to predict the result of either the Brexit referendum or the US presidential election, that may not be something to rely on too much. 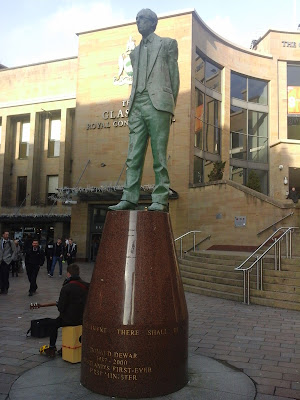 I travelled from Aberdeen to Glasgow by coach, braving a driver who threw my luggage around and didn't seem to like my English accent much. Glasgow is an extraordinary city - once the Second City of the Empire, as they are fond of reminding you despite the Empire being politically unfashionable nowadays - and the fact that its inhabitants voted majority Yes in the indyref seems to me to have been the result of their tremendous self-confidence and justified pride in themselves, rather than any anti-English feelings. At least nobody here seems to be as upset by an English accent as the Aberdonian bus driver. I remarked to the young receptionist in the hotel that I thought Glasgow was a great city, and he replied, 'Yes, it's the best city,' in a tone of great finality.

This statue outside Glasgow Concert Hall depicts Donald Dewar, 'Scotland's First Ever First Minister', as the inscription says. He represented the Labour party, and had been active in Labour politics UK wide before the new Scottish Parliament was created and he got the gig of being its First Minister. His death after only eighteen months in office is widely regarded as a tragedy both personally and for Scottish politics. It seems to have been almost forgotten in some quarters that the Scots did not rush out and vote by a landslide for a nationalist government as soon as they had the devolved opportunity, they elected a coalition of Labour and Liberal Democrats. That seems rather quaint now, so comprehensively have both parties screwed up in the sixteen years since Mr Dewar's death.

A footnote to justify including an old photo of Glasgow Central Mosque that I like. Some of the polling in the run-up to the indyref found that Scots of immigrant heritage had higher rates of support for independence than the population as a whole. Commentators speculated that this might be due to their fears about the rise of the populist right and anti-immigrant feeling in England. Interestingly, Police Scotland have reported that in Scotland they did not observe the large increase in assaults on people of Central and Eastern European origin that was recorded in England immediately after the EU referendum. Either Scots are just more tolerant, or the populist sentiments that are being channelled by the far right in England are flowing into the independence movement in Scotland and being expressed through a non-ethnic form of nationalism. The whole situation is extremely complicated, and now that we have a President Trump to contend with as well, God only knows what may happen.