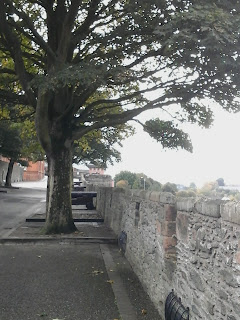 To anyone who knows Berwick upon Tweed this will look very like the walls for which Berwick is famous, but these fortifications are not on the border between England and Scotland but in a city that's now close to the border between UK-administered Northern Ireland and the Republic of Ireland. Everything about the place is so controversial that even choosing what to call it has political overtones. Its original name was Derry, in 1613 it became Londonderry, it is now referred to officially as Derry Hyphen Londonderry, and it's currently the fashion to call it LegenDerry, which I like.

The walls of Derry are similar to those of Berwick but more complete and with more imposing gateways through them. They are of course a big draw for visitors - so much so that an English accent surprises the locals less than it does in Belfast - and you are expected to stroll around the complete circuit and admire both the views and the structure of the walls themselves. I've done my best, but I can't see this defensive structure as anything other than oppressive. 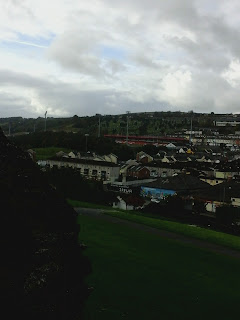 This photo is taken through one of the crenellations in the wall, looking down on the Bogside area. The tourist info panel says that the nearby Royal Bastion was built to give a clear field of fire over the Bogside, back when it was the field of approach of an enemy army rather than a housing estate, but if I were living there now I would always have the feeling that the forces of the state could start firing down on me at any time.

Within the walls of Derry there are some of the most beautiful Georgian streets I've ever seen, and that's presumably where the rich merchants originally lived. Just outside the walls is where the poor people lived, and seemingly still do. I have never seen any other city where the historical distribution of power and wealth is expressed spatially in such a stark way. I don't find it conducive to a carefree holiday stroll. 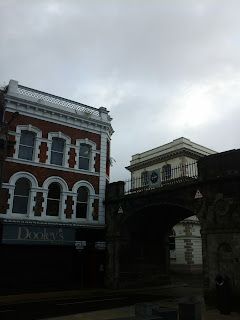 This is one of the entrances / exits to the wall. It doesn't have actual gates any more, but during the Northern Ireland Troubles the British army blocked off some of these arches and set up checkpoints there. I've seen a photo, and I really think that it would cure anybody of finding walled cities romantic or picturesque. I don't suppose being shut in /out was any more enjoyable in the 17th century than it was in the 20th.

I've trudged round four different museums that between them cover every shade of political and religious opinion on the history of Derry-Londonderry, making conversation with the staff of all of them in the most neutral tone I can muster. The only thing everybody agrees on is that they're all really worried about what will happen when the UK leaves the EU. There is much head-shaking and "we'll just have to wait and see." 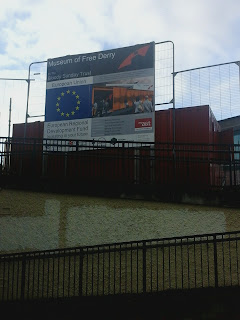 One of my visits was to the temporary home of the Museum of Free Derry, an archive of the civil rights movement in the impoverished nationalist Bogside and the events of Bloody Sunday in 1972 when 13 local people were shot dead by British troops. Its permanent home is in the process of construction, and you can see in this photo that the European Regional Development fund is contributing some of the funds. Don't get the idea that the EU is doing this because it's pro nationalist and anti British, though. I also visited the Siege Heroes Museum, a loyalist operation attached to the Apprentice Boys Hall that celebrates the heroic defence of the city by its starving Protestant inhabitants against the troops of the Catholic King James II in 1689. The Siege of Derry looms very large indeed in the tradition and imagination of the unionist community. The young man on the desk told me that its smart new building was also funded by the European Union. "We took the money and now we've run," he said ruefully. 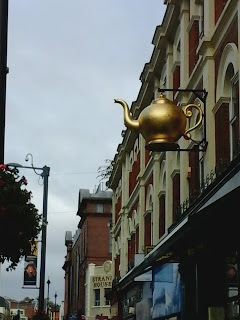 On the same day I arrived in Derry-Londonderry, Radio 4 broadcast a programme from it, exploring the fears of a new 'hard' border between Northern Ireland and the Republic after Brexit. Though, as one contributor said, it shouldn't be called Brexit because it's not just Britain leaving, it's the whole of the UK, including Northern Ireland. (Uxit?) There was a suggestion among some contributors that the events following the referendum on EU membership has exposed as a fiction the claim that the UK is a free association of equal partners and shown England imposing its will on the other nations of the UK. (Though to be fair, I think Wales voted majority Leave as well.) That's exactly how Scotland feels, and that's why Berwickers are worried as well.

I wanted to find a cheerful aspect of Derry to end this post on, and the best I could come up with was this golden teapot. It hangs outside a shop in the Strand Road, it's covered in real gold leaf and it's bigger than the golden kettle in Boston! A nice cup of tea, that really does unite us all.