You May Experience Connection Problems 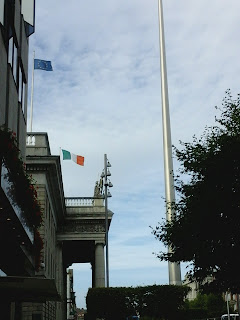 Hello again! I drew my blog to a conclusion, as I thought, back in June, when I moved away from Berwick, but I now feel compelled to write again. In an attempt to get a different perspective on the future of the English-Scottish border, I've travelled to Ireland. The extreme cheapness of the flight to Dublin from Newcastle or Edinburgh with Ryanair makes it easy to justify doing this on a sudden impulse.

One of the nice things about being in the Republic of Ireland is escaping from the endless wallowing in the First World War that's going on in Britain, but then the ROI keeps banging on about the centenary of the Easter Rising instead. This is a photo of the General Post Office in the main street of Dublin, now called O'Connell Street, that was the headquarters of the Rising of 1916. Note the flag of the European Union flying alongside the Irish tricolor. The amazing metallic spire, soaring to a giddy height that won't fit in my photo, replaced a statue of Nelson that was blown up by nationalists in the 1960s. I'm sure the spire was an improvement. If anybody would like to demolish some more statues of Victorian worthies back in Britain, they can feel free as far as I'm concerned.

I paid my 10 euros and went round the museum inside the GPO. The main attraction is a noisy film of comedy Englishmen of the 'I say old chap' variety having rings run round them by Irish rebels, but there are also some very good videos of interviews with serious Irish historians, from which I learned a lot. It is clear that the British reaction to the Rising was hopelessly bungled and only succeeded in uniting a nation that was previously divided over the aims and tactics of nationalism. I could see similarities with what is going on in Scotland at the present time. To settle for devolution or to hold out for full independence? Can such a small nation survive on its own? Is independence more important than prosperity? Surely the country's prosperity will actually be greater when Britain is no longer siphoning off the proceeds of its key industries? 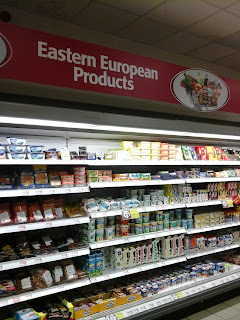 The big difference between now and 1916 is of course the existence of the European Union. I snapped the photo on the right in the supermarket over the road from my hotel in North Dublin. It's a large section, because there are a lot of Eastern European immigrants in the Republic of Ireland. (Okay, I know Poles hate being called Eastern Europeans, they insist Poland is in Central Europe, but evidently the Supervalu chain hasn't had that memo.) Most of the crew on my Ryanair flight were Polish. From being always known as a country of emigration, Eire is now also a country of immigration.

I then got the train up to Belfast, and the bus back from Belfast to Dublin. I grew up in the 1970s when television news showed soldiers patrolling border checkpoints between Northern Ireland and the Republic. It is now a completely open border. Nothing happens when you cross it. Absolutely nothing. Cruising down the motorway on the express bus, the only way you can tell you're back in the Republic is that the direction signs start to be in Gaelic as well as English. There isn't even a flag or a 'welcome' sign like you get between England and Scotland. On the train, the only reference in the entire journey to the fact that you are technically travelling between two different states is that the log-in screen for the free wifi says 'you may experience connection problems between Dundalk and Portadown'. And sure enough you do, because the broadband codes are being switched to make sure BBC iPlayer knows when you're in the UK and can watch on-demand telly and when you're outside the UK and can't. My phone showed Roaming in the Republic but switched back to being in the UK north of the border, and the same in reverse on the way south. In Belfast, all calls were included in my monthly bundle, in Dublin, not. I found this weirdly fascinating. In 2016 we don't need anything as crude as soldiers stomping about the border, we can monitor your every move digitally. 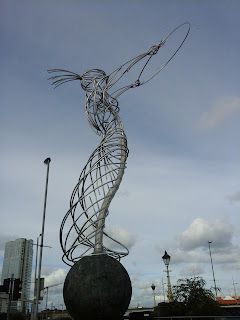 This is a sculpture in Thanksgiving Square on the waterfront in Belfast. According to the distinctly waffly description board, it is inspired by a variety of female figures in Celtic mythology and expresses themes of peace, reconciliation, hope and aspiration, while the fact she is standing on a globe refers to our modern global village. If you say so. The last time I was in Belfast was in 2002 and since then the city has been completely transformed. It now has a very attractive and lively city centre, full of exuberant young people, and with the highest density of coffee shops I've ever seen, possibly indeed in Europe. Being there moved me very much. A small voice at the back of my mind said that perhaps in twenty years time Aleppo could look like this.

But today Theresa May, Prime Minister of the UK, announced that she will formally trigger the process of leaving the European Union in six months time. When I heard this I wanted to cry. All this openness and ease of travel, this creeping de facto re-unification under the auspices of the EU, could be destroyed by Brexit. In a few years time there may once again be armed checkpoints all across the Island of Ireland. And across the Island of Britain, if Scotland proves as loyal to the EU as Eire. Every time I go back to Berwick, a town that would be blighted more than any other by a 'hard' border with Scotland, I have to make conversation with Conservative supporting, Leave voting, locals who are thrilled at the result of our EU referendum. I just want to say to them, Are you out of your bloody mind?