And It's Goodbye From Me - Tweed to Tyne 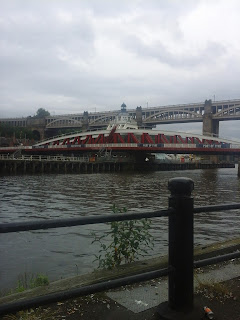 This post will be my last on this blog for some time, possibly for good. It depends on whether there are any more dramatic developments affecting the border between England and Scotland. My original thinking regarding the referendum on the UK's membership of the European Union, now almost upon us, was that a vote to Leave would trigger a fresh outburst of campaigning for Scottish independence that I ought to write about, but that a vote to Remain would mean I could gracefully sign off from reporting on the Borders as the status quo would be assured. I now think that whatever happens in the referendum we are in for a turbulent time politically, so I may as well sign off before the fateful date of 23rd June.

Because the thing is, I'm not actually living in Berwick any more. I sold my flat there and went to the Antipodes for three months, as previously described on this blog, and I am now living mostly in Newcastle-upon-Tyne while I contemplate the possibility of returning to the Antipodes for a while. I found I couldn't bear to move out of the region described in the heading of this blog, the land between the rivers Forth and Tyne, but I am now living at the far end of it, on the bank of the Tyne. This photo shows two of the bridges across the Tyne, the railway and the swing bridges. 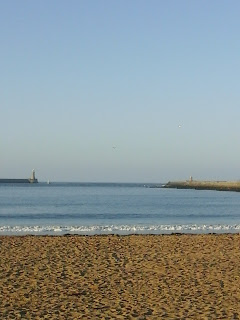 I chose this view because archaeologists have now discovered that the original Roman bridge across the Tyne, the Pons Aelius or Hadrian's Bridge, was on the same site as the modern swing bridge. Presumably because convenient crossing points don't change that much. So this post continues the theme of my last about the Roman sites at Wallsend and South Shields. The photo here on the right shows the entrance to the harbour at South Shields. On the left side of the picture is the town / village / suburb of Tynemouth. This is where the river we love so much flows out to sea.

I was fascinated to learn that matching altars to the Roman gods Oceanus and Neptune have been found near the swing bridge, and that Alexander the Great is known to have sacrificed to the same gods when he reached the mouth of the river Indus. Presumably the Romans were conscious that the mouth of a river was the point where they left the land and entered the realm of the sea gods, and so it would be prudent to ask for their protection. 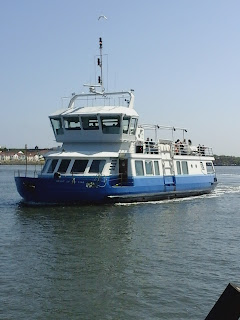 This is the Shields ferry. It chugs between the two banks of the Tyne several times an hour, a journey of only five minutes or so but one rich in cultural associations within the region. This vessel is called Spirit of the Tyne, which is apt. There is a sculpture outside the Newcastle Civic Centre that is supposed to represent some sort of presiding deity of the Tyne. I hope that the spirit of the river was able to share in the sacrifices to Oceanus and Neptune.

I read somewhere that it may not be mere coincidence that so many rivers on the eastern side of Britain have names beginning with the letter T. The Tyne, the Tees, the Tweed, the Till, the Teviot ... they divide up the region and mark out areas of allegiance and affection. The suggestion from linguists is that these names may all derive from some ur-name beginning with a T that just meant a river, and that would mean there is unity in their diversity. I like that.

Recently I have become deeply gloomy about the political and social strains tearing at the fabric of life in the UK. Nobody could deny that this country faces some really serious problems and challenges. I think that's why I've come to find it so soothing to look at the rivers Tyne and Tweed and imagine the thousands of years that their waters have been flowing to the sea. We fight each other, but the land and the waters outlast us all. 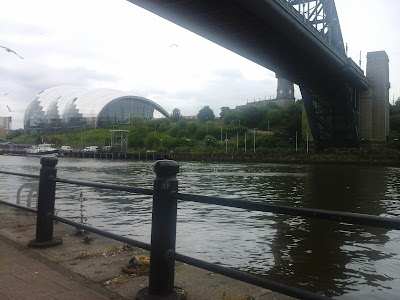