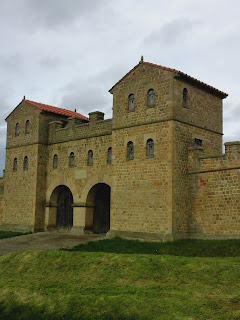 This is the reconstruction of the West Gate of Arbeia,  the Roman fort on the south bank of the river Tyne, in present day South Shields. It is not part of Hadrian's Wall, which apparently confuses a lot of visitors who can't conceive of any Roman ruins not attached to the Wall, it guards the other side of the estuary of the Tyne, preventing Northern British enemies from sneaking down the coast and attacking from the south. The counterpart on the northern bank is Segedunum, in modern day Wallsend (duh!) and I talk about that below.

At a later date Arbeia became a supply base for the garrisons all the way along Hadrian's Wall. Excavations have shown that it had far more granaries than was normal  for a fort and also dug up an unusually large number of the metal tags bearing the Emperor's head used to seal supplies. So it seems that food was shipped from Continental Europe into the estuary, offloaded here, then transported to the line of forts stretching to the Solway Firth on the west coast. 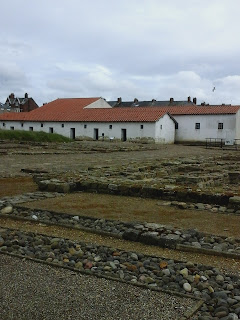 In fact it was a jolly important place, and the commanding officer accordingly enjoyed the ostentatiously large house you can see reconstructed in this photo on the right. One of the staff told me that even after the Romans had been there for 200 years and must have understood that the climate of North East England is not well suited to al fresco living, they still insisted on employing the standard house plan involving having to cross a roofless courtyard to get from one room to another. Adapting to local conditions would have meant an intolerable loss of status. Compare the British in India.

Because of these reconstructions, built on top of the foundations of the originals, Arbeia is more fun than the usual archaeological site where you just stare at a few old stones. It also has a small but wonderful museum of things found on site, some unique in Britain and all of amazing quality.

The fort is thought to have been originally called something else and to have been later nicknamed Arbeia, meaning 'place of the Arabs', after the employment of specialist boatmen from the river Tigris, in modern Iraq, to sail and fight on the Tyne. I can't tell you how much I love this image. Although of course this happened before the emergence of Islam, and those Arabs were probably Christians, I still see some sort of appropriateness in the modern presence of a mosque just down the road from the site. On this ancient imperial border, we see that the Romans were multi-cultural avant la lettre. 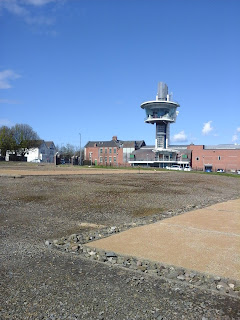 This picture on the left shows the archaelogical site of Segedunum, or Wallsend, on the northern bank of the Tyne estuary, with the building that is now used as the museum but was formerly the canteen of Swan Hunter shipyard, hence its resemblance to the prow of a ship.

This site presents a moving exploration of how successive layers of history were lived out and left their traces on the same site. Both Segedunum and Arbeia used to be covered with 19th century terraced housing that had to be demolished to expose the Roman sites, and some of Segedunum lay under the Swan Hunter yard. The piece of Wall that ran down the slope from the fort to the river was first exposed when the shipyard was being extended to make it large enough to build the Mauretania in the early 20th century. And a coal mine can still be seen adjacent to the surviving stretch of Wall on the other side of the fort. A considered decision was made to preserve some visible evidence of this mine and grant it the same respect and validity as the Roman remains. 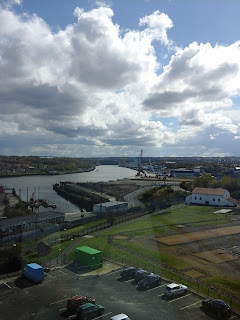 I took some photos from the observation platform in the former shipyard workers' canteen, showing the striking landscape of river, abandoned shipyard, excavated ancient fort. This is the one with the least reflection of me and my camera - sorry it's still not great, but you get the idea. You can see a reconstruction of a bathhouse in the far corner of the site, sadly now closed to visitors because it's no longer structurally safe. They're still trying to work out how the Romans prevented a steamy bathhouse from rotting in the damp British climate.

A modern monument has been erected on the site bearing all the names of those Roman army personnel known from surviving records to have actually physically built the Wall, with space left to add any more discovered. When I first visited the site, Swan Hunter was still operational, and this juxtaposition of modern and ancient construction workers was very powerful. Now, the shipyard is as derelict as the fort. It has passed into history in its turn.

And what of the layer of history below the Roman one? The museum explains that the people who lived in North East England before the Roman colonisers arrived were called the Brigantes. Below the foundations of the fort archaeologists have found ploughed furrows that were never planted with anything. The invaders kicked the farmers off the land between ploughing and sowing. The Brigantian farms near the Wall were abandoned soon after, either because the Romans forcibly removed the local population for security reasons, or simply because their social and economic systems were so badly disrupted by having a giant wall built through the middle of their community that their lives became impossible and they moved of their own accord. This all sounds horribly familiar from more recent times. Brigantian farmers, Roman builders, Geordie shipwrights - all just local people trying to make a living on the banks of the great river.