Oh God, Not Another Referendum. 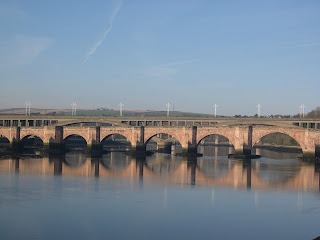 I'm now back from my three month adventure touring New Zealand and Australia. I've lost my acclimatisation to the bitter Borders wind, and I've spent the last week going round huddled in my thick winter coat telling everyone I can't believe it's still this cold, much to their bemusement since everybody who's spent the whole winter here thinks it's quite pleasant and spring-like, actually.

As if the weather wasn't enough to get used to again, the state of British politics is enough to make me want to jump straight back on a plane. The first I heard about the EU referendum was when I was lying on my bed in a hostel in the resort of Franz Josef Glacier, in the Southern Alps of the South Island of New Zealand, listening to the BBC news online. Ringing across cyberspace came the voice of David Cameron telling me that this was the most important political decision I would have to make in my lifetime. It quite spoiled the holiday mood, I can tell you.

My first thought was that I really resent having to go through this referendum business all over again after being put through the wringer less than two years ago over the Scottish independence vote. This has continued to be my dominant feeling about the whole thing, and now that I'm back in the Borders I can confirm that it seems to be most people's overriding reaction here. There is a kind of weariness about the way people discuss the EU vote. Or, in fact, don't discuss it, because it is clear that most people are avoiding stating their views openly in social situations for fear of falling out with their friends and acquaintances, in exactly the same way as they did with the question of Scottish independence. One of my Berwick friends told me, 'we just don't talk about it to anyone, especially in Scotland, we're afraid there may be murder done'. What makes it trickier is that, unlike the Indyref, it's impossible to predict what any one person's opinion will be on EU membership. It cuts right across all other political alignments.

There is no doubt that the prospect of a Leave result in the EU referendum triggering a second Indyref in Scotland has reactivated all the fears and uncertainties over the future status of the border between England and Scotland. Property prices in Berwick are still falling, with masses of lovely houses up for grabs and not shifting. Nobody except me seems willing to come right out and say so, but I am sure that the property market in this area is being depressed long term by an unwillingness to live on a border that could yet become the frontier of the EU. I'm glad I sold my flat when I did.

Being in New Zealand at the time of the announcement of the Euroref, if I'm allowed to call it that on the analogy of the Indyref, has given me a rather different perspective on it to the way I saw it before. The Kiwis see the EU as 'a hostile trading bloc' and resent being relegated from a favoured 'daughter' of Britain to just another non-EU country, stuck in the longer queue for passport checking at Heathrow and told that their butter has no privileged access to European markets any more. And they really, really resent the way EU farmers are showered with subsidies and handouts while Kiwi farmers just have to stand on their own two feet in the market. Actually I think I agree with them about that. Today the National Farmers' Union came out in favour of remaining within the EU. Gosh, there's a surprise.

I look forward to seeing how Anne-Marie Trevelyan, our new Conservative MP, balances the demands of subsidy-seeking farmers and immigrant-loathing housing applicants in her constituency over the next few months. I reckon that even if it achieves nothing else, the Euroref could well destroy the Conservative party. And that result would be worth any amount of biting our lips and changing TV channels between now and June 23rd.