So Where Exactly Does the United Kingdom End? 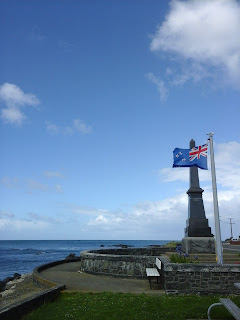 As I come to the end of my period of travelling around Australia and New Zealand, I am thinking more than ever about the future of 'the United Kingdom'. One of the things I'm looking forward to about returning to 'the UK' is that the people who live there hardly ever call it 'the UK'. We think we live in Britain, but when I offer this in response to the person on the ticket desk of some museum who is dutifully collecting visitors' origins for their stats, they often look a bit confused. Then they look down their list of options and say, 'So that'll be the United Kingdom then'. If I get the opportunity, I explain that in the wake of the Scottish indyref the term United Kingdom has become associated with an explicitly Unionist political agenda and 'Britain' is more neutral. Nobody much in Australasia seems to understand this, and really, why should they.

I do think though that the management of Best Western Australia could be expected to have a firmer grasp of political geography than that demonstrated by their online hotel booking form. It gave me the options of saying I was from: a) United Kingdom - Great Britain, b) United Kingdom - Scotland, or c) United Kingdom - Wales. Being from England is not possible except by identifying England with Great Britain, a bad habit the English already have that ought not to be encouraged, and being from Northern Ireland is not an option at all, an egregious howler since the correct differentiation between Britain and the UK is that the latter includes Northern Ireland and the former does not. But hey, Best Western is run by Americans, what can you expect.

My stay in New Zealand (or Aotearoa as its inhabitants increasingly like to call it) coincided with its referendum on changing the flag. The photo above shows the present flag flying beside the war memorial at Bluff, the southernmost point of the New Zealand mainland. It was a pet project of the current prime minister, John Key, to change the flag to one that does not include the flag of the United Kingdom and thus could be seen as representing the modern independent nation rather than the former colony. The previously chosen alternative is shown below - it keeps the stars of the Southern Cross but replaces the UK flag with the Silver Fern long associated with NZ. The result of the referendum has just come in and the Kiwis have rejected the proposed alternative and opted to keep the old flag. Not by as large a margin as predicted though, the result was 57: 43, and as I understand it a lot of No voters were motivated more by dislike of Mr Key and all his pet projects than by devotion to the traditional flag. 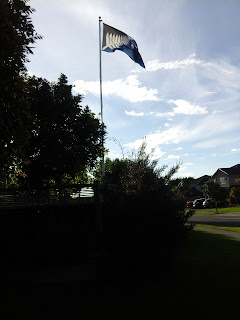 I am not, of course, entitled to have an opinion on what flag Kiwis ought to adopt, that's entirely a matter for them. I am though entitled to have an opinion on the attitudes to 'the mother country' that were displayed during the referendum debate, and I found a lot of them exasperating. I was told by one tour guide that it was appropriate to keep the UK flag because 'we are still part of the Commonwealth'. Very few countries of the Commonwealth have chosen to reference the UK in their post-independence flags, and anyway, the sad truth is that hardly anybody in Britain outside Buckingham Palace gives a damn about the Commonwealth. There seems to be a widespread view overseas that the Union Jack has something to do with the Queen. It doesn't.

I even read one letter in a newspaper that said NZ was still part of the United Kingdom, and considered writing to the paper to point out that it very definitely is not, but wasn't quite sure if the letter was intended satirically. Even if that particular writer was being sarcastic, there is certainly a degree of attachment to the UK in New Zealand that is not reciprocated and seems embarrassingly inappropriate to a British visitor. All the more so because the proportion of New Zealanders who have Scottish ancestry is very great and you would think that some anti-Union sentiments would have travelled out there with them.

I started off by telling people that if Scotland becomes independent, which everyone I know believes is inevitable eventually, and the United Kingdom breaks up, NZ is going to look a bit daft using the flag of a country that doesn't exist any more. Then I realised that the NZ flag has taken on a range of associations that are no longer anything to do with the UK. The most emotive argument used by the No to the New Flag lobby was that thousands of New Zealanders had fought and died under the present one. The photo above of it flying beside the war memorial on a weather-beaten coast seems to me to capture a lot of the emotions evoked by this argument. It was tempting to say, So doesn't that just prove that Kiwis ought not to have got involved in British wars? But I could see that would have been insulting to those who feel deeply about this. The Returned Services' Association in Aotearoa New Zealand will keep flying a flag that includes the one created to celebrate the Union of England and Scotland, regardless of what happens in Holyrood. Such are the vagaries of colonial history.