The Scotland of the South 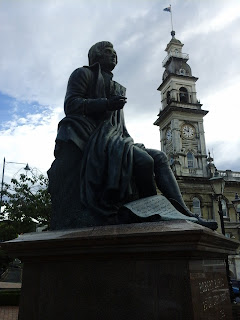 Hello again from the southern hemisphere. I am still working my way around New Zealand by bus, and have now made it right down to the bottom end, to the province of Otago. This is the statue of Rabbie Burns in the centre of the city of Dunedin. When I first saw it I was impressed by this evidence of the residents' devotion to literature, or perhaps to the egalitarian ideals of the poet. I then discovered that the city was founded by a Rev. Thomas Burns who was a nephew of Rabbie, and deduced that erecting a great big statue of his famous uncle was a way of perpetuating the family name somewhat more subtle than putting up a great big statue of the founder himself.

Dunedin is the old Gaelic name for Edinburgh - it is still used in modern Gaelic - and the settlement in Otago was a conscious attempt to re-create Edinburgh in a new land. The main street of Dunedin is called Princes Street. Other streets in the central city are called George, Stuart, Moray, Hanover and St. Andrew. There are suburbs called Mornington and Corstorphine. Luckily the discovery of gold in Otago later generated the wealth to enable the New Edinburgh to be built in a fitting style. 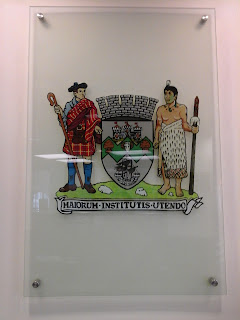 The city's coat of arms shows a Maori and a Scottish Highlander standing side by side. In fact, apparently, Lowlanders were actively preferred for migration to the early settlement, as they were felt to be more sober and Protestant, and the names of the small towns in Central Otago sound like a lullaby of home to a visitor from the Scottish Borders: Roxburgh, Teviot, Ettrick, Kelso. There is even a Berwick just outside Dunedin.

It seems that when raising sheep in the rolling hills of Otago became a big thing, Highlanders were then thought the best people to do it, hence the man with the kilt and the crook. Though, to be honest, most of the Scottish diaspora seems to have adopted tartan-ism as the most obvious signifier of the old country, without bothering to distinguish Highland and Lowland traditions. The motto means 'by following in the steps of our forefathers'. My O' level Latin can't really see that in it but I will have to take the word of Dunedin city council. 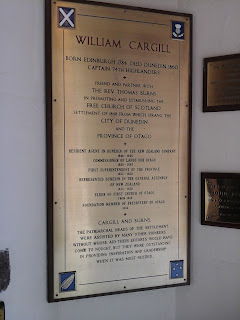 I am writing this in the city of Invercargill, on the very tip of the South Island, with only a few small islands between it and Antarctica. The weather here would make any migrant from the Debatable Land feel right at home. I've had to finally pack away the hot weather clothes and buy an anorak.

The town was named after the William Cargill commemorated on this plaque, the joint founder of Otago. Note the motifs on the corners of the plaque. The image of the thistle entwined with the fern has long been the symbol of the Scots in New Zealand, as in this 19th c. poem, while the juxtaposition of the fern and the Southern Cross constellation anticipates the design of the proposed new NZ flag.

The glorious thing about Invercargill is that all of the streets in the city centre are named after Scottish rivers. The main shopping area is on Dee, Tay and Esk streets. Keep going and  you come to Spey, Clyde, Don, Forth, Ness. Most poignantly to a Borderer, there are streets named Jed, Gala, Eye, Yarrow, and yes, Tweed. They've even allowed the Tyne to sneak in. The southern gales blow me through a permanent memory of home, a lyrical grid plan of settlers' nostalgia. I can't decide if I feel homesick or I feel at home. Probably the early settlers experienced the same ambivalence.