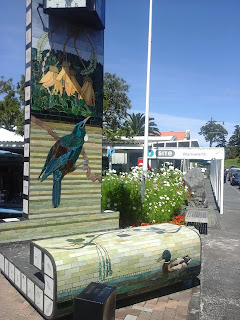 In my last post some weeks ago, when I explained that I was about to depart for Australasia, I promised that I would post about anything I came across there that seemed relevant to the remit of the Debatable Land blog, and this seems to fit the bill.

Warkworth is a village in North Northumberland, about twenty minutes' drive from Alnwick, where I grew up. Yesterday I visited the town of Warkworth in New Zealand, which was named after the Northumbrian one. The tourist blurb describes it as a 'captivating historic village', and while in truth it is increasingly becoming a commuter suburb of Auckland, from where it is less than an hour's drive north, its setting on the bank of the Mahurangi river is not dissimilar to Northumbrian Warkworth's lovely location on the bank of the river Coquet. 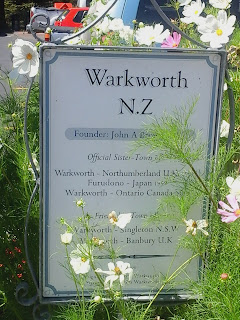 Warkworth in Northumberland has a sign at the entrance to the village announcing that it is twinned with Warkworth in New Zealand, so I was happy to see that the latter returns the favour. Although at present the sign is somewhat obscured by the flowers of the southern hemisphere summer, you can see that Warkworth NZ  has sibling and friendship arrangements with a number of other places too.

According to the New Zealand History website, Warkworth NZ was founded by John Anderson Brown, who bought the land in 1843 and named the town after his birthplace in Northumberland.

He went on to name one of the original streets after Alnwick, and of course I just had to go and check that out. After labouring some distance uphill in heat of around 30 oC, I was rather disappointed to find that Alnwick Street is, at least to the British eye, a not particularly historic looking stretch of unremarkable houses. 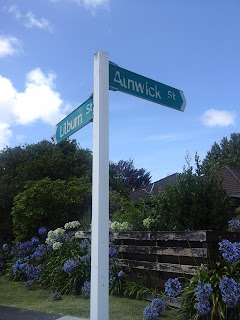 Before doing this I called in to the visitor information centre - in New Zealand these are given the rather brilliant name of the i-site - and found the staff less excited about the arrival of a visitor from Northumberland than I hoped they might be. They did though let me have an original copy of the leaflet with the map in, rather than the photocopy they were giving everyone else due to leaflet stocks having reached a critical level. I asked them how they pronounce Alnwick - in the original town the l and w are elided to end up with Anick, but the street named after it is just pronounced the way it looks. This got me wondering whether John Anderson Brown pronounced it that way himself or whether the Northumbrian pronounciation was gradually lost over time. Alas, we may now never know.

Lilburn Street, also seen here, is named after another village in Northumberland. The Lilburns were a prominent family among the Border Reivers, but that probably wasn't the association intended for the street. 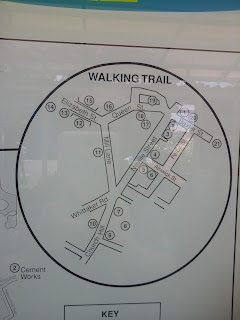 Less commendably in my eyes, Mr Brown named several streets of his new settlement after families of Northumbrian nobility - Percy, Neville and Bertram. It was some consolation to see that the main feature of Percy Street is now a large branch of the appropriately named New World supermarket chain. I found it pleasing to see the family name of the Duke of Northumberland attached to this most egalitarian and mundane feature of modern life, rather than to the elegant 19th c. town houses that still constitute Percy Street and Percy Terrace in Alnwick.

In fact, there is a fascinating ambiguity in the use of Old World names in the settler societies of the New World that is difficult to appreciate without making the journey between them. Was the founder intending to honour the nobility of the country he had left by naming streets after them, or to subtly bring them down to earth by attaching their names to a rough pioneer settlement? There is also the consideration that the Percy and Neville families were bitter rivals and might have taken a poor view of seeing their names attached to parallel streets, to stand side by side on a map for ever more. 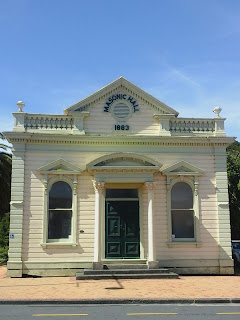 In a new country old names take on new significances and associations that are just as valid as the original ones. The people who go about their daily lives in the shops and cafes of Neville Street don't care tuppence about what the Nevilles of Northumberland were getting up to at the time of the Norman Conquest, and nor should they.

The original Warkworth is dominated by the ruin of a medieval castle, apparently such a textbook example of a motte and bailey castle construction that school parties regularly go to study it. Warkworth NZ seeks to draw the visitor's attention to its historic cement works. There is a nice parallel there of an Old World building designed to maintain the power of the nobility and a New World facility for producing the material for sheltering ordinary people.

Let's not get too idealistic though - the most prominent and historic looking buildings in the centre of Warkworth NZ nowadays are this Masonic Hall and the Bank of New Zealand, which is a pretty clear indication of the early residents' priorities.