Debatable Land Heads for the Antipodes 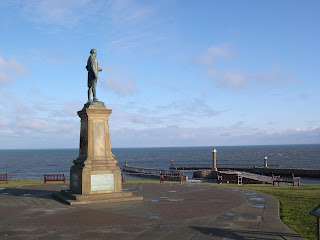 This is the monument to Captain James Cook at Whitby. He stands on the headland of this chilly, windswept piece of the North Yorkshire coast, gazing out to sea. Whitby is outside the usual geographical range of this blog but it just about qualifies as north-east England. At any rate, Arriva buses do a North East Explorer day ticket whose validity stretches to the far side of Whitby, which is good enough for me.

More importantly, this monument to 'a great Yorkshire seaman' symbolises my imminent departure for Australia and New Zealand. I've been there before, in fact I had visited Auckland before I visited Whitby, which was perhaps a little unusual of me, but made my emotional reaction to the port from which Cook sailed on the voyages of discovery that led to the founding of the modern nations of Australia and New Zealand much stronger than it would have been if I'd remembered it from my childhood. I've just visited the town again and the plaques on this monument made me cry all over again. I know that it is now considered insensitive to talk about 'discovering' a land mass that was already occupied by other groups of people, but I don't believe that invalidates the spirit of adventure and enquiry that prompted the voyages. 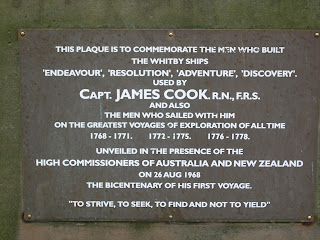 I have also just visited the birthplace of James Cook, for what I'm ashamed to say was the first time ever.  It has now been incorporated into a lovely public park in Middlesborough, a city historically part of Yorkshire but now the centre of the modern urban county of Cleveland. Sadly the cottage where the great man was born was knocked down about fifty years later, though luckily he was sufficiently famous by then for the site to be marked. There's now a rather elegant stone urn on the spot, and round the base has been carved Cook's famous remark about wanting to go, 'not just farther than any man has been before, but as far as it is possible for a man to go'.

This line - at least in a revised gender-neutral version - has been my inspiration and motto ever since I first heard it. It has become confused in my mind with the classic opening of Star Trek about exploring strange new worlds and seeking out new civilisations, but I think that's fine because I'm sure the example of the great sea voyages has influenced the writers of fictional space voyages. One of my friends in NZ told me that Cook literally did go as far as it was possible to go, because he took his ship up to the edge of the ice of Antarctica. But of course the sentiment can also be taken metaphorically. It is absolutely right that it should be carved on the site of the humble cottage where he was born, in what is now an ordinary public park in an unglamorous town. It reminds us that genius can emerge from any background, a fact from which the contemporary British education system seems to be in determined retreat.

I was able to book my own voyage to Australia and then on to New Zealand with just a few distinctly non-epic mouse clicks. I leave on New Years Eve and arrive on New Years Day - appropriate or what? So this blog will be in a state of semi suspension for a few months. But if I come across anything relevant to the English-Scottish Borders while I'm out there - which is more likely than you might think - I'll post about it. And if there are any seismic political developments at Holyrood or Westminster that will affect the Borders - also not that unlikely - I will be on the case. In the meantime, wish me haere ra (Maori for bon voyage).
Posted by Elaine Housby