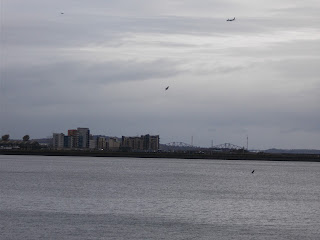 Having finally succeeded in divesting myself of my decaying flat in Berwick, I am a newly footloose traveller. Halloween finds me in the Premier Inn on Leith Waterfront, with the reception staff barely visible behind swathes of fake cobwebs. Leith Waterfront is one of those rebranding exercises whereby docks and industries are replaced with soulless blocks of over-priced apartments and a shopping mall. The harbour that my hotel room overlooks is actually that of Newhaven, originally a fishing village just outside Edinburgh.

The last few days have been what the Scots call 'dreich' and all this photo has to recommend it is that it captures the grey, damp, chilly atmosphere of the east coast in late autumn. The distinctive shape of the Forth Bridge in the background marks the northern limit of the area covered by this blog. Beyond the Firth of Forth, there is no more historically disputed territory, there is only unequivocal Scotland. The Romans surveyed the tribes beyond the Forth and decided they weren't worth the effort of conquering. The Kingdom of Northumbria once stretched as far as the Forth, but its kings never tried to push it any further. I look at the Forth Bridge and it seems to be saying to me: don't come any further, Englishwoman. 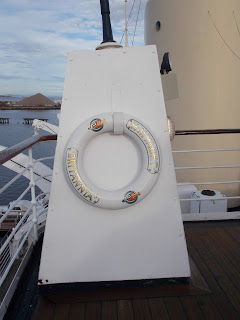 Today I decided on impulse to go round the Royal Yacht Britannia,  now permanently moored in Leith dock. It was decommissioned in 1997 in a controversial money-saving exercise and after touring the ports of the UK for a while (I remember it coming to Newcastle) it was sold to a maritime conservation charity and settled down as a stationary visitor attraction.

The blurb in the exhibition says that Leith beat off the competition from other ports just because it demonstrated the best plans for preserving the ship and making it accessible to the public. At the time though there was some feeling that giving Britannia to a Scottish port was a calculated act of political prudence, at a time when Scots were showing worrying signs of losing enthusiasm for the United Kingdom. It might have been even more canny to send it back to Clydeside where it was built, since Glasgow has proved the least keen on the continuance of the UK of any region of Scotland. 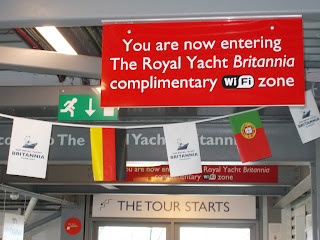 Today there seemed to be plenty of Scots just as keen on looking round Britannia as visitors from overseas, or from England. Things to do with the royal family are never top of my must-see list, but this was one of the best organised visitor attractions I've been to. See, it even has its own free wifi, presumably for all those people who feel the need to tweet their whereabouts continually to the world.

Everyone of my generation remembers those photos of newly-weds Charles and Diana waving to their adoring public from the ship's bridge. Today I got to see that very bridge, specially designed for royals to show themselves to the public, complete with teak windbreak to reduce instances of royal ladies' skirts blowing up. We all gazed intently at the bed in the honeymoon room, the only double bed on board, specially installed for Charles and Diana, and tried not to look too prurient even as we all reflected that a cramped cabin with a crew of 150 sailors watching your every move can't have been the best start to married life. The almost unbelievably basic sleeping quarters of the ordinary sailors were part of the tour, a sobering contrast to the luxurious royal rooms. As the sailors lay hunched up in their tiny bunks they must have speculated on what was going on in that double bed two decks above them. They simply must have done.

I found the experience of touring HMY Britannia more moving than I expected. I remember the scenes when Hong Kong was returned to China and its last British governor sailed away in Britannia in the pouring rain, in what seemed at the time to be the final instance of the flag coming down on a former imperial possession. In its after-life in Leith, Britannia could yet be a immobile witness of the Union Jack descending the flagpole for the last time in Scottish waters.