The Most Scenic Rubbish Dump in the Country 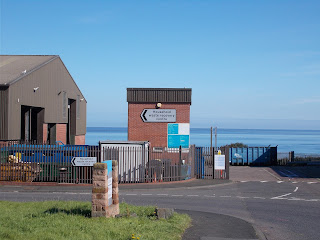 Everyone who visits Berwick is impressed by its beautiful coastal location, but it may not always occur to those who only associate the seaside with holidays that when you live on the coast the sea view is always there, as a background to the most mundane activities. This is Berwick's rubbish tip. Sorry, 'household waste recovery centre', with an emphasis on the recovery part. I am happy to report that our recycling rates have recently shown marked improvement.

As you cudgel your brains to work out which skip your items should be tossed into, you can relax for a moment by enjoying the beautiful blue sea in the background. The view is particularly fine from the top of the ramp that leads up to the Rigid Plastics skip. Immediately behind Rigid Plastics is the area devoted to old mattresses, but if you lift your eyes just a little higher, the North Sea stretches out in all its glory.

It would be nice to think that the view helps to remind struggling recyclers of why it's worth making the effort to stop all that plastic getting into the sea, killing marine wildlife and then ending up back in our own food chain. Carrier bags are a particular menace to any kind of animal or bird that eats fish, because they have evolved to identify a white thing floating in the water as a fish and swallow it forthwith. They then either choke or starve to death as the plastic blocks their digestive tract.

On 5th October new legislation came into force in England obliging shops to stop giving out free carrier bags and start charging 5p for them. Similar rules have been in force in Scotland for quite some time now and Scots shopping in Berwick have been acting rather superior as the English folk next to them in the queue look confused about it all.  It is really remarkable though how quickly we have all got used to it. The number of plastic bags used has dropped like a stone since the legislation came into force. You wouldn't think that 5p would make that much difference, but as someone said to me, they all add up. Personally I think that the real difference it has made is that it is now socially acceptable to put my shopping in my backpack, whereas before it was regarded as a bit weird and hippy-ish. 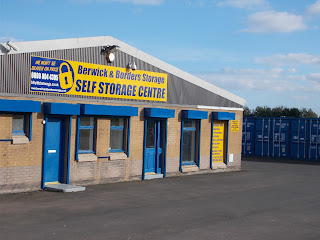 A fantastic feature of Berwick for anybody moving house is that the rubbish tip, the new self storage facility and the Salvation Army's shop selling second-hand furniture and household goods are all located within a few minutes walk of each other on the development on the outskirts of the town formerly known as North Road Industrial Estate and now as Ramparts Business Park. The former name was less confusing, as the real ramparts are about two miles away. The Scottish border is a matter of a few hundred yards up the main road from the entrance to the estate, so ours is not only the most scenic but the most northerly rubbish tip in England.

I have whiled away the months that the English system of property sale takes to grind its weary way to completion (in Berwick you are always aware that it's all different, though not necessarily better, selling a property in Scotland) by disposing of as many of my surplus possessions as possible, and that means I have been spending a lot of time up here. Tip? Donate to Sally Army? Or store it?  The fact that the storage unit is immediately past the entrance at the top of a hill and the tip is at the far end of the estate at the bottom of the hill tends to incline me to just chuck it all into storage. I have a feeling that in a year or so's time when I've realised I don't need any of it I may end up just transferring the whole lot down the hill and into those recycling skips.