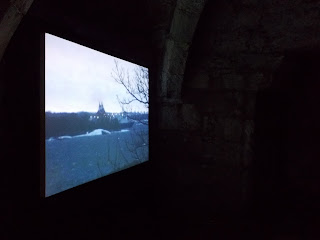 I think that the Berwick upon Tweed Film and Media Arts Festival ought to be re-named the Festival of Film in Caves. Not since the prehistoric painters of Lascaux  have so many artistic productions been found in subterranean environments.

The video installation shown on the left was actually one of the less impressive offerings this year, but Coxons Tower is such a fantastic venue that it makes anything look good. It is the inside of a lookout tower on the defensive walls of Berwick and has striking stone vaulting. 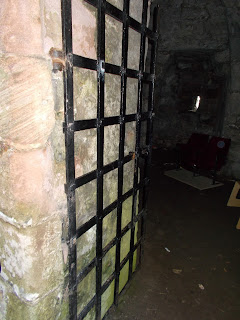 You can see in this picture that the organisers have had the wonderful idea of installing a couple of real cinema seats in the Tower for viewers of the video. There is something really memorable about sitting in a red plush seat inside a centuries old fortification watching an ultra modern video.

Several of the other venues on the 'trail' of video art installations are ice-houses. Bleak, dank, echoing man-made caves, effectively, temporarily illuminated by film. You slither down, or up, the muddy entrance paths and pick your way across the uneven beaten-earth floor with a feeling of excited anticipation about what you may see inside. Nobody who has experienced this aspect of the Berwick festival ever forgets it. 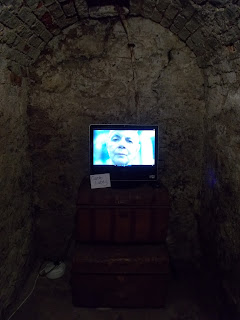 To add to the excitement the festival now has a 'fringe', which has stuck with the subterranean theme by using the empty cellars of a house in the town centre. There seemed to be a smell of stale wine in the air when I visited and this led me to assume that the cellars had previously been used for wine storage, but when I mentioned it one of the young organisers said that it was more likely to be the result of their own activities the night before.

Most of the art in the 'fringe' house was as good as the official installations, and some of it was better than some of them. Special mention to Carole Lubey's powerful piece, shown left, of an older woman dancing nude, and Brooke Stephens' beautifully observed film of the patterns made by water spreading on a wall and mist rising Gothic-ally from a cemetery. 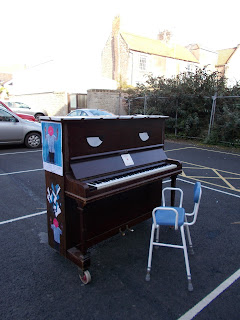 To grab the attention of passers-by the location of the fringe house was marked by this piano. I'm told that somebody was playing it some of the time, though I didn't catch that myself. Rather brilliantly, a Northumberland County Council parking permit had been propped on the lid of the keyboard, so that the piano could stand in the car park all day with perfect legality.

I'm afraid that this year's Festival finished on Sunday 27th September so it's too late to see any of these exhibits now. But do come next year, you will not regret it.
Posted by Elaine Housby