The Ruins of Temperance 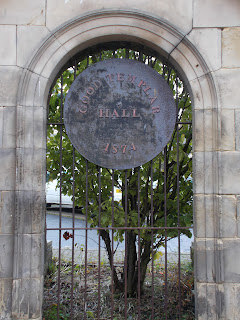 This is my first posting of photos taken with my new camera. The woman in the shop assured me that it had huge quantities of megapixels and would produce photos of a quality that would make me gasp in astonishment compared with those feeble efforts taken by my old camera. So far, I'm not convinced. But to be fair, it hasn't been trialled in a clear atmosphere yet, because the weather over the last few days has not been dry - unlike the subjects of this post (ha!).

This is the only surviving wall of the Good Templar Hall in Berwick. The name meant nothing to me at all, I had to google it. Turns out the Good Templars were / are an international organisation promoting the cause of temperance, that is abstention from alcohol. They have their own website if you would like to know more. Only American links come up, the UK branch of their operation seems to have quietly faded away. (If you know differently, please do leave a comment.) 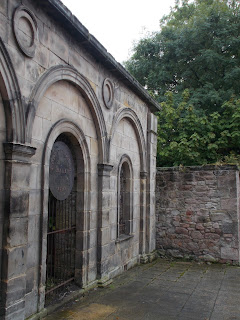 I learned more about this building from a booklet with the splendid title Berwick's Battle Against Drink by Wendy Bell Scott. I originally bought my copy a couple of years ago from a newsagent while killing time in the main street of Spittal waiting for the Christmas reindeer to appear. My first thought was that, unlike Flodden (q.v.) it is a battle most Berwickers seem to be trying to lose. The book is also available online from a local publishing outfit called Blue Button. Wendy's research started life as part of her studies at the Open University, and I was delighted to see one of my own former O.U. advisers, John Wolffe, featuring prominently in the bibliography. Pious Victorian reformers are one of his things.

The subject of excessive consumption of booze is still very much a live issue, and Berwick as usual has particular problems because of its position on the border. I'm told that in the past, before I lived here, there was an influx of Scots on Sundays because in those days Scotland took a stricter approach to pubs opening on the Lord's Day than England did. This cross-border situation is likely to be recreated, because the Scottish government is keener than the Westminster one to introduce compulsory minimum pricing for alcoholic drinks, in an effort to reduce consumption. In a previous post I described the likely effect on the parts of England just over the border of suddenly making booze more expensive in Scotland. Thankfully, implementation of the legislation to that effect passed by Holyrood in 2012 is being held up by legal challenges from the alcohol industry. I say thankfully - at a personal level I have always been sympathetic to temperance ideals, but the prospect of my street filling up with Scots who don't share them is not an enticing one.

God knows our resident English drunks are already a big enough nuisance. The original plans for the restoration of the riverside park included provision for some brave soul to abseil down the steep bank beside the river to collect up and remove all the cans and bottles chucked down there over the years. By now the lower levels must require techniques more closely related to archaeology than to simple litter-picking. Sadly it was reported that the assessment of the bank found it too unstable for abseiling to be safe. And in any case the drinkers can throw the things down faster than the council can pick them up. So beer cans and wine bottles continue to roll out of the undergrowth at your feet and witness to the cause for which the Good Templar Hall was erected.

P.S. I shouldn't forget to mention that the new leader of the Labour party is reportedly a teetotaller, a welcome survival of the historical association of the temperance movement with socialism, particularly Christian socialism.