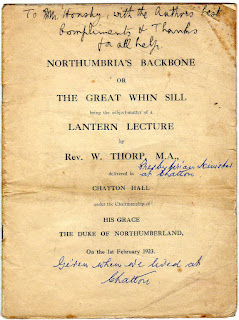 Spurred by my imminent house move, I've been once again sorting out the mass of old papers that have descended on me from various deceased members of my family. (It's down to one storage box now - believe me, that's progress.) This booklet was one of the things I came across, and for the first time I've actually read it properly.

It dates back to the days when a presentation accompanied by projected slides was referred to as a (magic) lantern lecture. On a no doubt freezing February night in 1923 the inhabitants of Chatton gathered in the village hall to hear the minister of the Presbyterian church expound educationally on the Great Whin Sill, an important geological formation that gives the Northumbrian landscape much of its character. The Wikipedia entry can tell you more.

I expected this lecture to be a boring technical explanation of the kind that only the desperate tedium of life in a small village in the winter before the advent of television (or even radio) could drive people to turn out for. In fact, it is a romantic, almost mystical, description of the route followed by the stratum of basalt known locally as the Whin Sill, with mentions of all the notable man-made features along the way as well as descriptions of the landscape itself.  The Rev. W. Thorp points out that medieval castles, prehistoric fortifications and relatively modern churches are all found on major outcrops of the sill, and muses on how the whin gives us strength and safety. Okay, we can readily agree that builders of all periods would have recognised that a massive chunk of rock was a sensible place to locate your defensive structures, but the minister sounds like some modern believers in earth energies talking about ley lines. 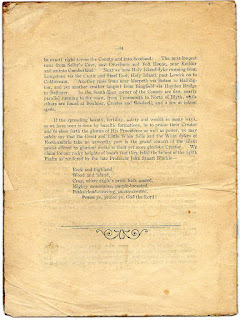 The really unexpected aspect of this lecture is the writer's conviction that living on basalt has formed the character of the local people. That's why he called the lecture Northumbria's Backbone, meaning that the rock is both geologically and psychologically the backbone of the county. He comments approvingly that Ulster also has large amounts of basalt rock and its people display sturdiness and hardiness similar to that of the Northumbrians. (Remember, he was a Presybterian minister, so his Ulster sympathies would have been distinctly one-sided.) A vaguely plausible mechanism for this - drinking the local water filtered through the rock - is mentioned in passing, but the essential idea is not much better than a piece of sympathetic magic. Hard rocks make hard people.

This idea is even more batty than the more widespread notion that racial inheritance determines character. One wonders how long the effect was supposed to last after moving away from the nurturing rock. Rev. Thorp says that it surely cannot be accidental that so many famous men and women have been born on whin. On the contrary, Reverend, I think it really can be. And I'm sure that those luckless enough to have been born on the soft chalk rock of the far south of England would take offence at the suggestion that they have therefore not managed to produce any great or famous sons and daughters.

It must have been a lonely life being the only man with a university education in a Northumbrian village in the early 20th century. One can understand why rural clergy developed consuming interests in some odd subjects. The modern believers in ley lines don't have that excuse. Perhaps such a sympathetic magic approach to life - a mystical identification with landscape - is somehow innate in us. I have more than once heard people who grew up in Northumberland and moved away for a while say that they came back here because they just couldn't bear living in a flat landscape, that they just missed the hills so much.