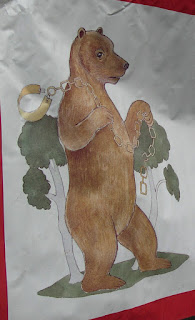 This terrific image was created by Borders artist Cara Lockhart Smith for the Berwick Trades Union Council to use on its banner. It cleverly references both the chained bear on Berwick's town crest and the famous Marxist advice that the workers of the world have 'nothing to lose but their chains'.

It is tempting to use this as a starting point for a discussion of the ideological arguments currently convulsing the Labour party, but those national issues are outside the local scope of this blog. I did have a purely local argument with someone over their blind devotion to an idealistic form of Christian socialism which life has cured me of believing in, but I don't want to go into that here either.

No, this image strikes a chord with me at present because I have finally succeeded in selling my flat. The buyers' faces were lit up with joy at the prospect of owning their very own holiday home on the Berwick quayside. Ah, how well I remember that feeling. Fingers crossed that in their case the feeling lasts at least until after exchange of contracts. The flat was marketed as a 'refurb project' or what my Kiwi friends call 'a fixer-upper', which marks my final admission that domesticity and DIY are perhaps not my strongest skill set and it would be better to let somebody else do it.

I hope I'm not betraying the whole spirit of this blog if I confess that I am getting a little home-sick for Northumberland. When I moved from Alnwick to Berwick I naively thought that I was staying in Northumberland, but I was very wrong. Berwick has been dragged kicking and screaming into a purely formal membership of that fine county, but it has never stopped resenting it. I told the estate agent that I would only consider buying a new place on the Tweedmouth side of the river, and it says a lot about this area that he did not look in the least surprised.

He had already told me that the political ferment north of the border has led to some clients deciding to move there because they want to make a definitive commitment to Scotland. I fear that I am starting to feel that I want to make a definitive commitment to Northumberland. Historical Northumberland that is, which includes the great city of Newcastle upon Tyne. Of course, if you want to go all the way back and talk about 'historical Northumberland' in the same way as scholars of the Middle East use the term 'historical Syria', the Kingdom of Northumbria once stretched all the way to Edinburgh. Yes, the present capital of Scotland was once ruled from Bamburgh castle. It was, admittedly, a very long time ago, and no Scot has ever expressed a desire to revert to that particular political regime.

So there may be a bit of a hiatus in this blog while I sort myself out. But never fear, my loyalty to this region will never fade, and I will continue to write about anything interesting that happens here. In the meantime, please continue to browse my 122 previous posts.