Carlisle: the other end of the border with some of the same problems 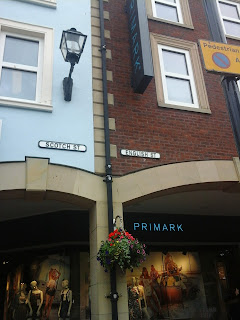 No, this is not a photo of Primark, even though I'm wearing one of their tee-shirts as I write, the point of interest in this picture is the two street names. Scotch Street and English Street are two of the busiest streets in Carlisle, the town on the English side of the western end of the English-Scottish border, and thus the opposite number of Berwick-upon-Tweed at the eastern end. These street names make it very clear that for centuries Carlisle was a centre for the administration of border law and a meeting place - often a violent meeting place - for rival families from England and Scotland.

After a period of travelling during which I spent far too much money I am now attempting to compensate for my extravagance by living as what is euphemistically known as a 'property guardian'. It's incredibly cheap but if you want the best deal you can't afford to be too fussy about where you live. So I'm now over on the west coast and having to travel frequently between my new home and the storage unit in Berwick I am desperately trying to empty out, which involves a lot of passing through Carlisle. 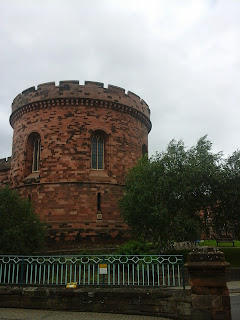 It is an attractive town with a lot of picturesque old buildings, many built from a lovely red coloured stone. At this time of year it is full of the kind of serious minded retired people whose idea of a fun holiday is a week of hard walking in the hills, possibly with evenings spent enjoying a fine restaurant or a glass of real ale. This border town is larger than Berwick, with a cathedral and some decent shops, something conspicuously lacking in Berwick. It does though have the same uneasy sense of a town dominated by fairly comfortably off retired people, both permanent residents and visitors, with a resentful working age population that is predominantly poor.

In Berwick, there is a general assumption that only the retired people have any money and so it will not be the working age folk contributing to any charitable event you're trying to get going, and this is only an extreme example of a spreading social trend. Yet politicians still talk as if pensioners were poor. Of course some of them are, but some of them have pensions that are double the average wage in small towns dependent on tourism, and yet they still get free bus travel, television licences and a chunk of their gas bill. Saying so during the current general election campaign has been absolutely taboo. I am not a supporter of the Conservative party but I think that one of the things Theresa May has got right is to attempt to shift the payment arrangements for care in old age away from the assumption that it is fine for ordinary taxpayers to subsidise other people's property inheritance. Needless to say she was forced to retreat on this by the massed ranks of pensioner power.

Oh dear, I seem to have strayed off the subject of the border, don't I? But wait, there is a link! Because the future of the border depends on the electoral performance of the SNP, and that depends to a large extent on how much the Westminster government pisses off the Scots, and that will all depend on the results on June 8th. It is noticeable that the SNP manifesto pushes the question of independence firmly onto the back burner - because all the polls are still showing a clear majority against it - and admits in a roundabout sort of way that they can't really use their newly acquired power to raise income tax as it might 'lead to a loss of revenue', i.e. a lot of wealthy Scots would move to England. We can probably expect to see even more comfortably off retired folk in the English border towns.