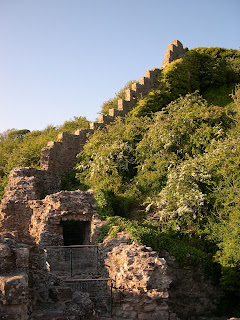 I am conscious that my last few posts have consisted of intemperate ravings about the general election, and feel a need to redress the balance. So here are some pretty pictures of the ruins of Berwick castle on a lovely summer evening (yesterday, in fact).

Despite its importance as a border fortress, there is not a lot left of Berwick castle, because it was inconveniently occupying the site deemed most suitable for a railway station by the Victorians. I have always admired the confidence in progress that led them to feel no qualms about knocking most of it down. A fine view of the only surviving outer wall can be had from the northbound platform of the station. It continues down the hill to the river, as seen in this picture. 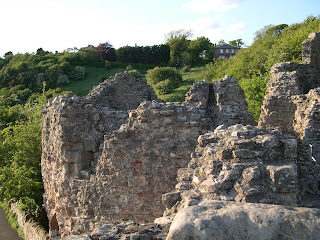 Some local tourism activists would like to rebuild the castle, or at least erect a gift shop amid the ruins. This seems to me to be: a) barmy b) expensive and c) unlikely to attract visitors who have the option of any number of other castles within half an hour's drive. Castles are pretty much ten a penny in the English Borders. As somebody who grew up in the shadow of one of the most imposing, Alnwick, and regularly played on the beach beneath another, Bamburgh, I have serious castle fatigue. When we went on holiday to Wales during my teens I moaned all the time about being made to tour another load of castles - built of course for the same reason, to maintain English control over another nation of the British Isles. But lots of people from more peaceful parts of England love the things. 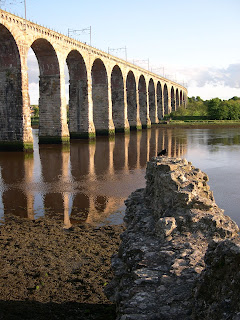 That bird obligingly alighted on those stones at just the right time. When a composition like this comes together in a fine evening light, I remember why I came to live in Berwick in the first place. On a wet Wednesday in January, the ruins just look, well, ruined. There are a couple of benches strategically placed for admiring the views that also provide a home for the local drunks, hence the fine scattering of broken glass all over this ancient monument. In the right mood I appreciate this for the same reason I appreciate the Victorians knocking the rest of the thing down. Life goes on. Some of the activities of medieval people that we research today would have been disapproved of and censored in their own time. 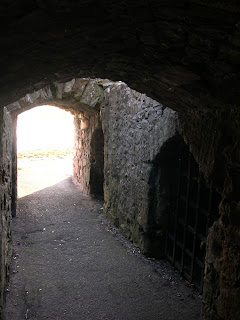 These rooms on the lowest level of the castle, used by the soldiers on duty to keep warm as best they could while keeping an eye out for the enemy, are the only rooms to have survived. I always find it a little creepy when walking past them to the river bank, as shown here. The atmosphere in the tunnel is dark and dank even in the summer. The local drunks treat the cells as convenient waste disposal chutes for their cans and bottles, and the metal grilles installed by the conservation bods make it impossible to reach and remove them. Yes indeed, life goes on.