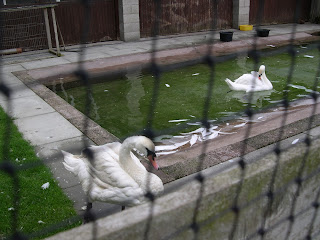 Regular readers of my blog may remember that I have always derived much comfort, in the face of the vicious local, national and international politics afflicting Berwick, from the herd of swans who swim serenely to and fro across the border, and that I have always admired the work of the Swan Trust with their  motto 'caring for wildlife both sides of the border'. So when I saw that they were having an open day I resolved to go. That was earlier today, and I was not disappointed.

The Trust was originally formed to protect swans from injury and the effects of pollution, but it has branched out to cover all kinds of wildlife and is officially called the Berwick Swan and Wildlife Trust. 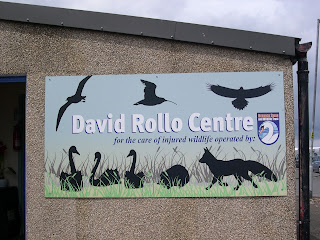 It now has premises out on the industrial estate, named the David Rollo Centre in memory of a local vet who did a great deal of unpaid work for the Trust. Today the centre was housing: three adult swans, two cygnets, a brood of ducklings, two owls, assorted other birds, several hedgehogs, and a fox cub. The man who was answering questions said that they can't cope with otters, badgers, seals or deer. Seals are sent down the coast to Tynemouth or even Norfolk. Otters and anything large are taken in by the SSPCA (like the RSPCA only Scottish rather than Royal) over the border, who have more space and a bigger pond. 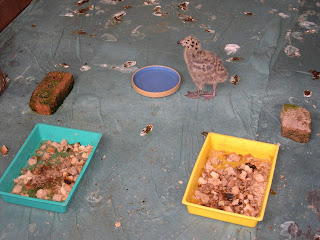 This cute little chap is a herring gull chick. They have lots of those. Apparently at this time of year a lot of chicks injure themselves by thinking they can fly when they can't. How sweet this one looked as he tried to flap his fluffy little wings and squirted out the contents of his tiny bowels! It was enough to make you forget that most Berwickers don't want herring gulls to survive, including me most of the time. Only, with timing so perfect you wouldn't dare make it up, one of the adult brethren of these little balls of fluff flapped his large noisy wings and emptied the contents of his large soggy bowels all over me as I walked through the town centre later this afternoon. That's right, on my head. I had to go straight home and wash my hair. Last year I lost a handbag to a seagull's forcefully ejected waste products. Still, as the man said, 'We are a wildlife trust, we can't discriminate between different kinds of wildlife.' He even claimed that numbers of herring gulls are falling. If they're falling in other parts of the country, that may be because they've all moved to Berwick. 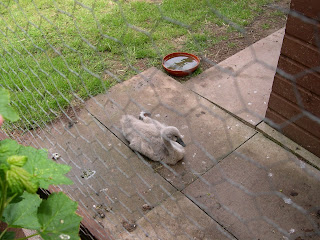 This cygnet came into the centre because his mother rejected him and tried to drown him. Surely a case for avian social services. One of the adult swans was knocked down by a car on Holy Island causeway after the driver tried to cross before the road was clear of water - yet another example of the damage done by idiots who think they know better than the tide table.

The fox cub was adorable. There is still a division in rural areas between those who hunt foxes for sport and those who rescue and nurse injured foxes. A small child covered her ears in horror when the Trust worker explained that they feed the cub on day-old chicks, which seems to prove that pro-hunting propagandists are astute to use photos of hens ripped apart by foxes to support their case. Hunting is now technically illegal but hunts are doing everything they possibly can, up to and sometimes beyond the limit of the law, to carry on as before. The Conservative party once promised to re-legalise fox hunting when it was returned to power, but it seems to have quietly let that drop. The hunting-shooting-fishing lobby likes to describe its activities as 'the traditional country way of life'. Actually, the people who give their time and skills free to the Wildlife Trust are just as much true country folk.